Translation - A Description of the Iranian Army's Peace-Keeping Forces

Introduction: The 16th armored division is the only unit which has a peace-keeping bn. ... Usually the philosophy of an army is to fight foreigners who have crossed the border. We were faced with an army whose work is keeping the peace in regions that, for whatever reasons, are already in war. This army is an answer to the call of the world, [unclear]. Before the UN, the 'League of Nations' had shown that there are many problems to face. Since it did not commit to its words, its operational leverage was very limited. [undecipherable]. We sat down with the commander of this battalion to interview [him].

Question 1: Honorable Colonel! It is possible that even much of our military audience has been unaware of the existence of the peace-keeping bn of the 16th armored division. Therefore, we ask you you talk about what time it began its operations, and how these operations continue.

Answer 1: I am Colonel 2nd-Class Mohammed-Reza Kazemi. The peace-keeping bn was formed in the year 1372 under the order/command of [?]. Under this order, one bn from the army ... was organized into a peace-keeping bn. The 185th mechanized-infantry bn of the 16th division, which was the most qualified army unit, was considered for the mission. This bn ... when evaluated... was found to be suitable for this mission.

I must mention that this bn endured many ups and downs, and has become more skilled on a day-to-day [basis]. From those years until now, we've tried to internalize [the lessons learned] from the various missions. Part of these missions were different, which [included] having assigned personnel to UN relief/aid missions.

Question 2: Needless to say, the mission and structure of this battalion are different from other battalions; please talk about these differences.

The PK bn is completely ready to send [its] force. Currently, we are deployed in a state of 'readiness/stand-by'. According to the chain of command, the bn represents the Army in these operations.

Question 3: If it is possible, talk regarding parts of the missions carried out by this bn ...

Answer 3:The PK-bn has conducted several training-operations inside of several countries. Selected officers from [other] countries have participated [in them]. [?] These officers, after a visit to their home-countries, deployed in a number of missions within the UN-structure, and it is an honor that these officers' training missions were in our country. [?] The PK-bn has sent forces to: Eritrea, North and South Sudan, and Ethiopia. The force(s) were observation-training-officers and were located within the UN organization/structure. All deployed officers received a peace-keeping medal and a letter of appreciation from the Army. 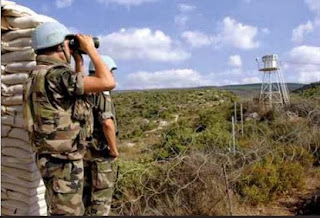 Answer 4: [unclear] I, as an Iranian, was proud when I saw that officers from other countries viewed Iranian officers very favorably. Before I came, I heard them say that “your's is the only country that is independent and stands on its own feet”. It is natural that I was not surprised by these words[;] their perspective is a product of the success that our society has gained in the aftermath of the Islamic Revolution.


Question 5: I think that this battalion has natural attractions for recruitment. Please, talk about the characteristics and indicators that each must have had been able [to do] in order to serve in this battalion (?) ... .

Answer 5: [unclear] Having the authorization of the Dep't of Manpower, the representative(s) of this battalion are sent to cultural centers (?), and  makes the choice of who are eligible to serve in the PK-Bn from among the personnel in training. One of the criteria is their interest in serving on a PKO. The [personnel] selected for this purpose must have complete readiness for a mission in each/every area of the world. [unclear]. ... Another selection-feature is a familiarity with the English language, which gives priority. Naturally, a person's [personal] views are evaluated. The reality is – we believe – that all Army personnel have the capability to be sent on these missions, and have the traits that I described.

Question 6: [given] the scale of the mission, and that [there is] only one bn, my question is[:] are there any plans for developing this type of unit in the army?

Answer 6: You are right. It is predicted that if the NEZAJA participates in PKOs, and if their capability would be insufficient for the such as mission, other battalions [could/would] quickly organize, train, and go on their mission.

Question 7: Let me outline a controversial question. We know that the characteristic and philosophy [for the] existence of armies is war. However, the task of such a battalion [as this] is to end the fighting, which is inconsistent with the existential-philosophy of the Army. My question is this: Why have other organizations not taken this role and how will experts evaluate this conflict.

Answer 7: The policy of the IRI – such that we know – is based on relaxation/detente and the establishment of peace and friendship, and respect for fellow man. The Army is moving in line with this policy. What you say is true, but we do not have an offensive and warmongering spirit in the establishment of such a unit, rather, we advocate peace and those values. Maybe, one of the examples of this claim is the change of one of our combat battalions, which we have made into a peace-keeping battalion.

Question 8: As a person who has experienced the peace-keeping forces of other countries, is most of mankind moving toward peace or war?

Answer 8: I must say that there are many variables in that question. Arrogant countries illegally and coercively intervene in weak countries, which naturally adds tension. These countries are pursuing their own interest. It is obvious they want the creation of this tension [to] procure the resources in these countries and also to find a market for the sale of their weapons. Therefore, one cannot definitively answer this question; because the reply to tour question is affected by the interference of imperialist countries. If they would [stop interfering] – which appears unlikely – the world would be moving toward peace.

Question 9: [question about what chain-of-command the bn operates under]

Answer 9: [The PK-bn, when it is on a mission, is under the command of the central HQ, which is probably from another country.]
Posted by Author: Galen Wright at 11:43 AM 5 comments: 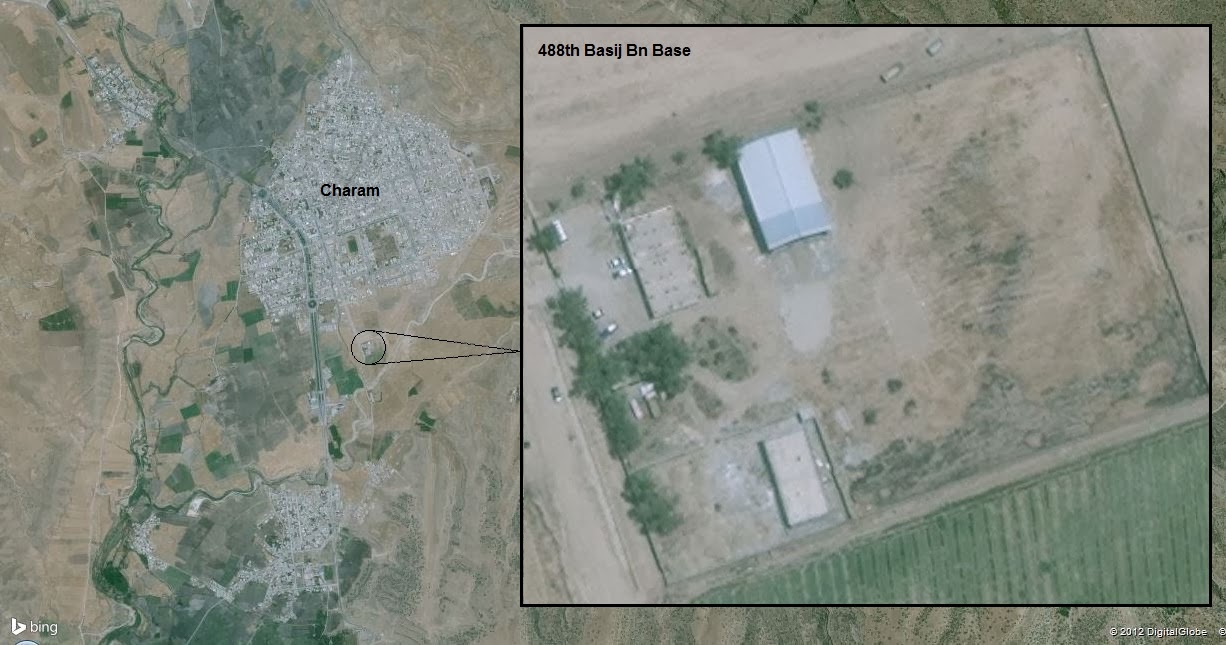 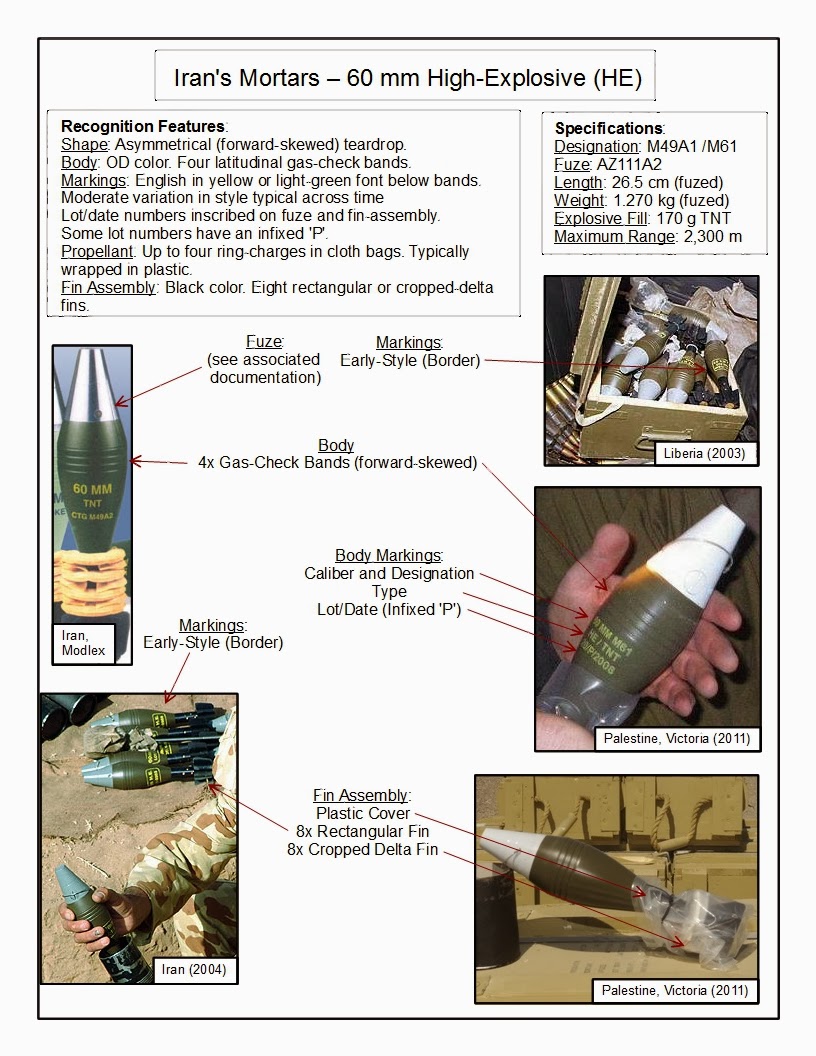 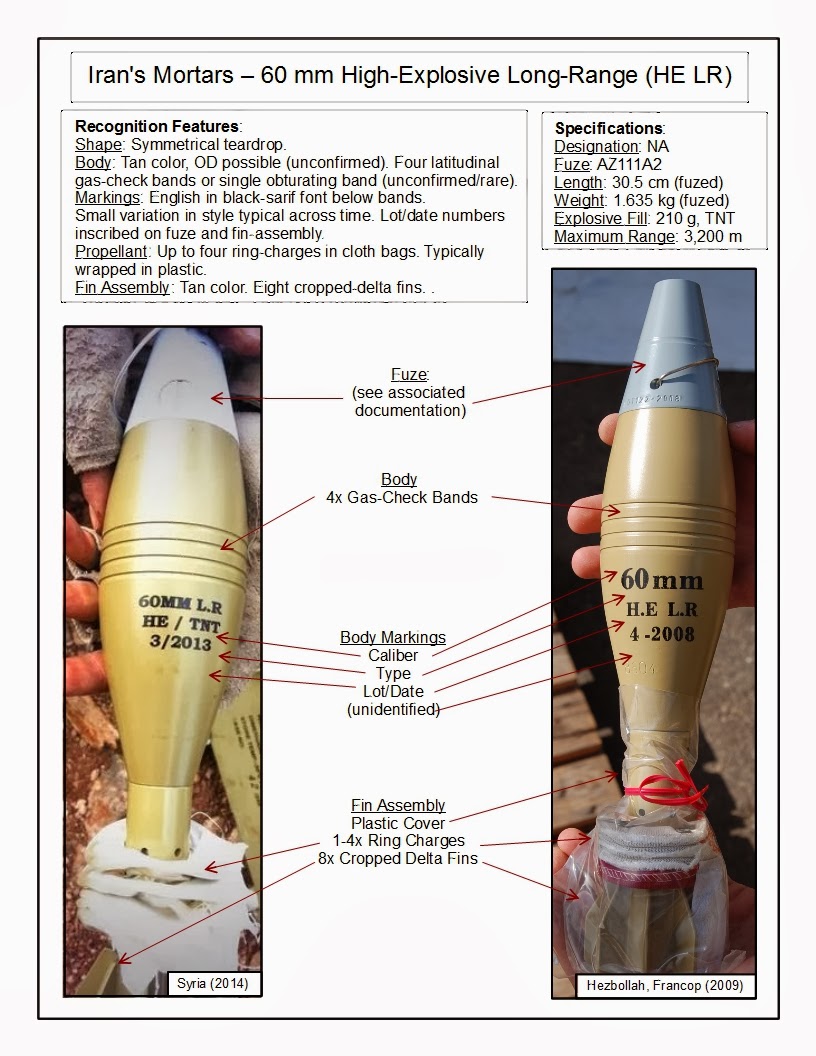 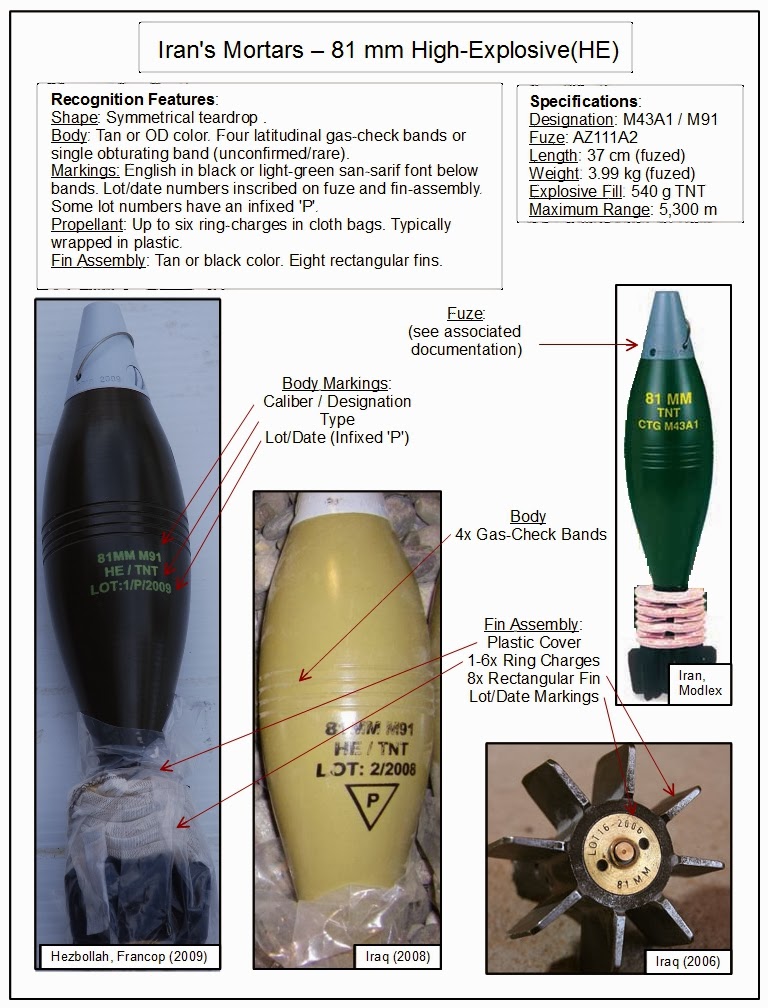 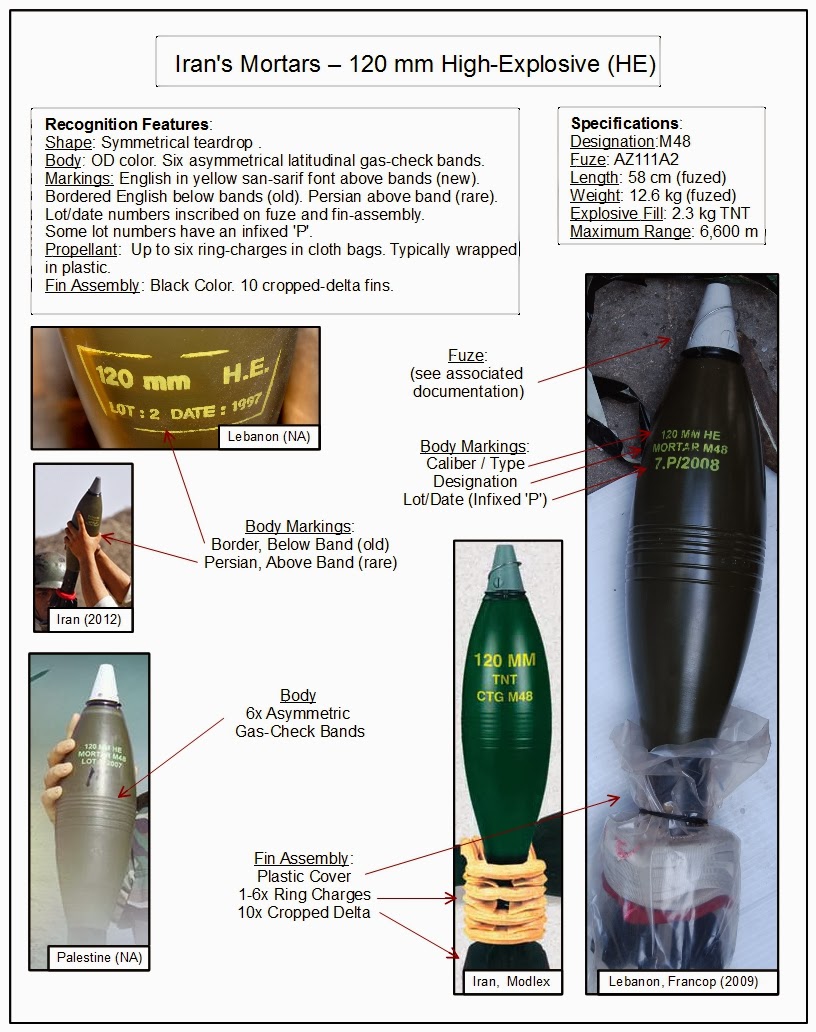 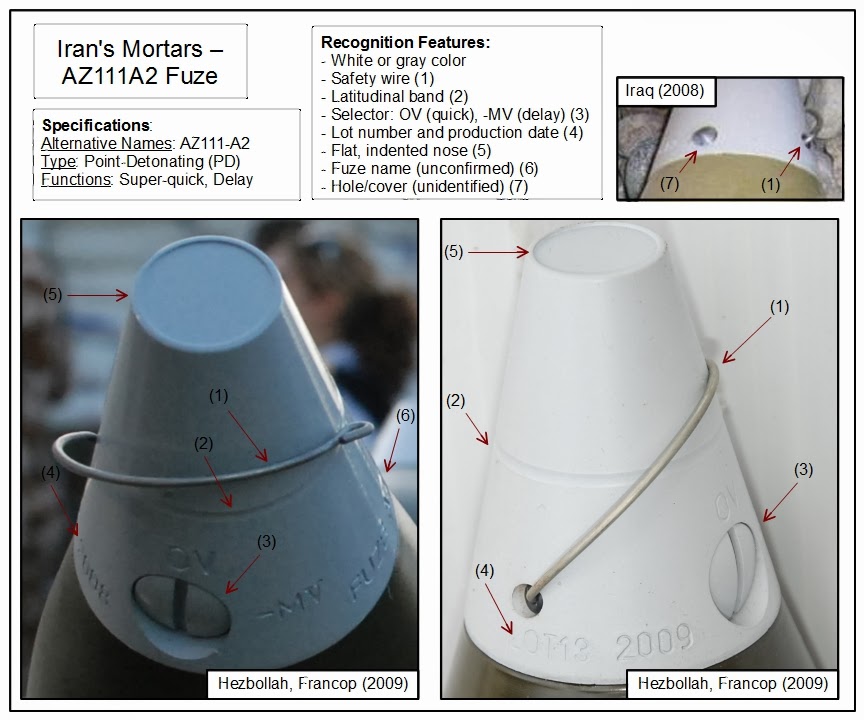 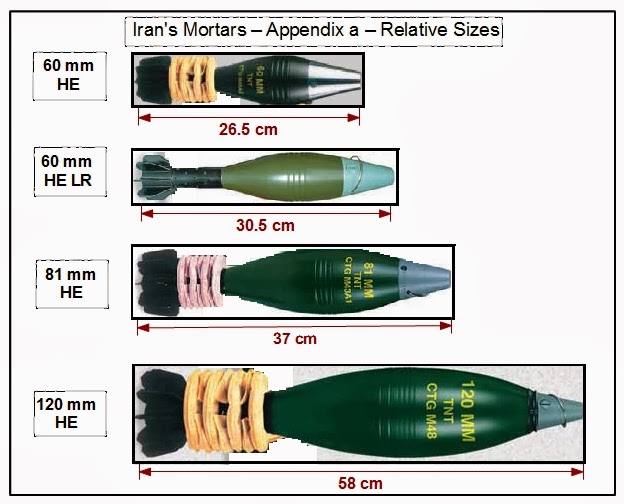 Thanks to reader "NICO" for pointing out the garrison's location.

The Sepah's 10th'Muharram' Air Defense Group is based near Shahrud in the north-eastern Semnan province. The garrison can be found about nine km N/NW of Shahrud, butted up against a range of small hills.

Unlike the air-defenses held by the Sepah Aerospace Force, the 10th ADG is subordinate to the Sepah Ground Forces. As of May 2013, it is commanded by Brig. Gen. 2nd-Class Abdulrahim Ibrahim. (1)

Iranian media reporting indicates that the group's subordinate units include at least two battalions equipped with, respectively, 23 and 57 mm guns. (2) Although it is possible that the latter is equipped with ZSU-57-2 SPAAGs, the S-60 towed gun is a far more likely option.

The garrison's layout is similar to other Sepah bases examined thus far, sharing the same style of buildings, which distinguishes them from Artesh bases. This includes reception-offices near the main entrance [a], a lecture/prayer-hall [k] and a pair of buildings constituting the group's headquarters [b].

Similarly, the five barracks buildings are identical in size and number to those in Neyshabur, and Torbat Heydariyeh. [c] These correspond to housing for the two known air-defense battalions, and their support. It's constructive to compare the relative amount of available housing in a Sepah artillery-group versus the amount in an Artesh garrison. The latter will almost always be greater than the former, pointing to a greater strength per brigade-sized formation. It's reasonable to believe that the two gun-battalions are this group's total combat-strength.

Other buildings include a small engineering/construction section [d], and the usual maintenance workshops [e] north of the offices and living quarters. Further north is an open motor-pool [f] for the group's transport and logistics section, and further north still are three hardened shelters inside a security perimeter for munition storage [g]. East of the barracks are 12 small garages, each with three bays. [h]

In the far south-east corner of the compound is a cluster of buildings, one of which appears to be a barracks. [i] The cluster's identity and the purpose of its isolation is unknown.

The lion's share of the compound is undeveloped and is likely used for training given the presence of firing ranges. A number of raised concrete pads dot the compound and are also likely training aids as they are characteristic of air-defense sites across the country. [j]