The 77th mechanized infantry division (MID) is a regular army unit based in the Khorasan province in north-eastern Iran. At the outbreak of the Iran-Iraq war the 77th was comprised of one armored brigade and two mechanized brigades; at the time they were armed with M-47 tanks and BTR-50 APCs. At this time the 77th maintained one infantry battalion and one armored company in Khuzestan. (1) While a complete history of their operations during the war remains unknown, the 77th is known to have participated in the following operations, Fath ol-Mobin (March 1982)(2), Ramadan (July 1982)(3), Badr (March 1985)(4), and Karbala-6 (Early 1987)(5).

Today, little is known about their current operational status or capability. They still maintain three brigades; the first is in Mashhad, the second in Quchan, and the third in Torbat Heydariyeh. (6)

Anthony Cordesman asserts that Iranian mechanized infantry divisions like the 77th are composed of: (7)
- one armored brigade
- three mechanized infantry brigades
- one reconnaissance battalion
- one SPA battalion
- one towed artillery battalion
- one engineer battalion
- one supply battalion
- one transport battalion
- one army aviation contingent
- one air defense contingent
Even assuming that this description would represent a 100% strength that may not translate to actual strength, the fact that Iran's divisions overwhelmingly use three brigades rather then four calls into the veracity of this claim. Regardless, it still might offer some indication into what the 77th looks like at a general level, especially when cross-refernced with visible features in available imagery. For instance, most mechanized units throughout the world maintain independent supply, transport, air defense, and engineering battalions at a divisional level. Presence of these independent units are difficult to independently confirm, but some evidence for them does exist. [EDIT: A commenter has pointed out that this chart needs one point of clarification; the army aviation contingent is not under the direct command of the 77th MID, but belongs to a different, independent command structure within the IRIAA) 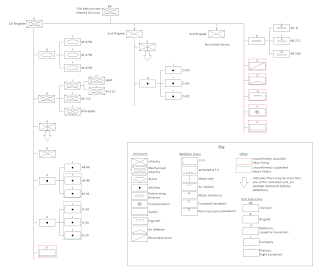 Although nominally a mechanized unit, the 77th is more closely comparable to a conventional motorized infantry division with a ratio of one lightly armored brigade, to two motorized-infantry brigades, especially by the standards of today where mechanization is standard in any infantry unit. On top of being understrengthed, the armored battalion is also equipped with the obsolete M-47M tank, though there are some signs of it being replaced with the T-72. Mechanized infantry battalions resemble those found in the rest of the country, with a mix of BMP/Boragh AFVs, M-113 APCs, and BTR-60 APCs. Motorized infantry meanwhile have been seen with the usual mix of motorcycles and ATVs, Jeeps, pickup-trucks and 5-ton trucks. Self-propelled artillery is entirely lacking, with artillery support being provided by towed battalions of towed guns like the D-30 and M-46. 107 mm Type-63 rockets are also deployed at an unknown level. Air defense is provided in part by Zu-23-2s and MANPADSs; these may be augmented by HAWK SAMs and/or 35 mm AAA. A commando battalion, identified in the past by their duck-hunter pattern uniform, is likely equipped for airborne assault operations using the Havinarooz detachment. Weapons deployed as a lower level includes recoilless rifles, RPGs, M-47 ATGMs, TOW ATGMs, mortars, G-3 rifles and possibly MANPADSs. Like the rest of the Artesh, the 77th is transitioning toward desert-pattern safariflage uniforms.

1st Brigade - Mashhad
The brigade HQ is located south-west of the city-center buttressed against a mountain range bordering the city. It is adjacent to a number of other military facilities belonging to various entities.These facilities are mostly found across the highway and occupy the north-facing slope of the mountains.

The central compound serves as the divisional headquarters for the 77th MID and is the largest of the division's bases. The reason for this, in addition to the fact that the 1st brigade is armored and consequently larger, is that any independent battalions attached to the division (such as supply, or air defense) are likely based here; this possibility is supported by the relatively large footprint of the facilities compared to other brigades, and the presence of multiple well-delineated sub-compounds.

In general, the northern portion of the compound tends to be occupied by living quarters and administrative buildings as indicated by the low, barracks-style buildings. The southern-half tends to be dominated by motor-pools, repair/overhaul shops and garages. One of the more visually interesting features of the base is the presence of scattered hardened shelters which likely hold munitions. Dispersing them throughout the compound is likely aimed at preventing the catastrophic detonation of a massive arms collection in the heart of a large city; the danger of which was illustrated to some degree by recent (as of the time of this writing) detonations in China and Cyprus.

Dominating the compound is the central motor pool and adjacent parade yard. In this motor pool is the brigades armored contingent, including a tank battalion made up of M-47Ms. While in most imagery, only a handful are visible at a given time, imagery from July 2006 shows 15+ tanks arrayed into three companies at 50-60% strength (five-six tanks each). The T-72s which have been paraded in Mashhad are nowhere to be seen. Immediately north of this are several BMP-type IFVs; using historical imagery, the most seen at any one time is ~five which matches the typical deployment rate for mixed light-armor companies incorporating a 50/50 mix of M-113 APCs and BMP-type IFVs.(8) North of this is approximately another company's worth of M-113 APCs. While they are not visible on recent imagery, parade photographs confirm the identity of a company of BTR-60PBs in early imagery from 2004 and 2006. On parade, soldiers in mechanized infantry units typically wear red berets.

Some of the brigade's artillery can also be observed in two locations within the compound. Occupying a parade-ground in the north-west portion of the compound is a battery (six pieces) of towed artillery, probably the M-46 judging by its split-trail carriage and length (~11 m). Historical imagery from 2004 actually shows a number of M-46 and D-20 guns in towed configuration and and connected to trucks. The self-contained nature of this sub-compound possibly suggests that the immediate vicinity houses the brigade's artillery battalion(s). In the south-east corner of the compound, several artillery pieces including M-46s and D-30s are visible from time-to-time in a courtyard surrounded by long buildings roofed in corrugated metal; possibly garages or workshops.

By far, the most common feature in the compound is the wide variety of trucks and other light, motorized vehicles. These include Safir-type Jeeps, Toyota Land-Cruiser pickup trucks as well as the larger five-ton trucks, probably Mercedes 1924s or 2624s; semi-trailer tractors are also common.

Opposite this compound, on the the other side of the highway, are a large collection of firing ranges, the Samen police academy(9), and a storage depot with hardened shelters and revetments. Most notably though, there is also a relatively new compound with large, blue-roofed warehouses. Adjacent to these buildings are a large number of widely varied earthworks which might indicate it's some sort of combat-engineering training area. It's unknown if this area is affiliated with the army, or belongs to the IRGC. The lettering on top of the roof of the warehouse reads "Martyrs for Peace". To the north and east of the brigade HQ are two military hospitals. (10)

The 77th's army aviation contingent - the 5th assault and support group -  is also based in Mashhad at TAB-14. (11) The Havinarooz airbase is located north-east of the main airstrip. Scramble on the Web indicates that this contingent is comprised of two airborne assault squadrons equipped with Bell 212s, one attack squadron equipped with AH-1s, and a recon squadron with Bell 206s. This composition is easily verified on recent satellite imagery from October 2010; 10 212s occupy the northernmost pads while the  six AH-1s are intermingled with six 206s on the southernmost pads. Adjacent to these pads is a large drive-through garage; the bases repair and overhaul facility. In the southern portion of the compound are several hardened shelters; likely the bases munitions storage. AAA emplacements dot the facility.


2nd Brigade - Quchan
This location is significantly smaller then the brigade in Mashhad, with little insight into its makeup visible from satellite imagery. Adjacent to the compound are a collection of firing ranges and about 2,000 m to the north is a storage depot with earthen revetments. A smattering of offices and administrative buildings can be found throughout the compound.

Running along the northern-most edge of the compound are a series of earthen berms surrounding a handful of hardened shelters and warehouses; this protection likely indicates munitions storage. In the middle of the compound are two different clusters of small buildings organized in rows and columns; because these buildings are surrounded by trees and only approachable via foot paths these are likely living facilities along the lines of barracks, kitchens, or classrooms.

South of these two clusters is a paved parade yard and a small training area with trenches, an obstacle course, and other minor features. Sometime between 2004 and 2010 a second training facility to the east of the parade yard, on the opposite side of the road, was bulldozed over.

The southern-most portion of the compound holds a good deal of garages, workshops and other metal-roofed buildings. Although no mechanization is visible, whatever armor this brigade does operate would be found inside these garages. A handful of large and small trucks are spread out throughout this area. At least one battalion of D-30 towed guns is visible in the open.

3rd Brigade - Torbat Heydariyeh
Like the 2nd brigade, the detachment located north of the city of Torbat Heydarieyeh is relatively small. Moreover, the only imagery is from 2003, though the quality is relatively good given the age.There is a second, suspicious compound 7.5 km to north-east which may be military related, but this cannot be confirmed for sure.  In the general vicinity of the compound are a series of firing ranges buttressed in between the compound and a small collection of hills to the east, and immediately north of the compound is a prison.


Within the compound itself, near the southern edge is a storage depot with a number of sheds surrounded by revetments. Following the road north to the parade ground, a mosque with its distinctive domed roof is visible on the right. Like Quchan, no visible mechanization is present; the motor pools on the western edge of the compound, as well as a smaller one on the east only contain the usual range of motorized transport ranging from jeeps to 5-ton trucks. Adjacent to the motor pool, and in the northern portion of the compound are exercise fields used for routine training. In the center of the compound can be found the parade yard and a small number of buildings which are, most likely at least, barracks and administrative buildings.