More so than other translations, the highly technical nature the budget reports means that the relative simplicity of the following tables hides potential difficulties in not just translating Persian to English, but financial-speak to layman-speak.

At a Glance:
- High disparity between the Army and IRGC's funding. Even ignoring the one-time allocation to the IRGC's Khatem al-Anbiya organization (see below), IRGC receives a billion more than the Army.

Ministry of Defense and Armed-Forces Logistics:
- Large quantity of ministry's funding earmarked for the ambiguously titled "strengthening/promoting defense".
- At first glance, industrial defense base (IEI, HESA, AIO) will recieve a paltry sum. However, since this is listed under capital assets, their actual funding may be buried elsewhere in the budget (e.g. "strengthening defense", or "maintaining defense industrial production").

Armed Forces General Staff:
- Not insignificant amount earmarked for development of naval infrastructure. Developments in the Oman fleet may correspond to the relatively new IRIN bases at Jask or Pasabandar, or their region-HQ at Konarak. Note that this funding is described as a capital asset.

Army:
- $1.8 m earmarked for Navy's expeditionary voyages, a relatively small sum in the grand scheme.
- Compare the $1.8 m allocated for all of the Army's border-security operations to the $185 m allocated for the IRGC's operations in the south-west. This makes clear who has the primary responsibility for internal security (which is entirely expected).
- $1.8 m for air-defense seems like a small sum given importance of IRIADF, again suggesting that funding may be buried elsewhere.

- $185 million for counter-insurgency (and general security) operations in Baluchistan (Shahid Shushtari Plan)
- $13 million for recruitment of Kurdish militias (Shahid Kazemi plan)
- One time allocation of $3.7 b for the Khatem al-Anbiya consturuction HQ (more than twice as much as the Army's entire budget, and a billion more than all the rest of the IRGC's budget) eludes apparent explanation. Major investment for something, but what?
Without the specific line-item 'plans' and the construction allocation, the IRGC's budget is much closer to the Army's. 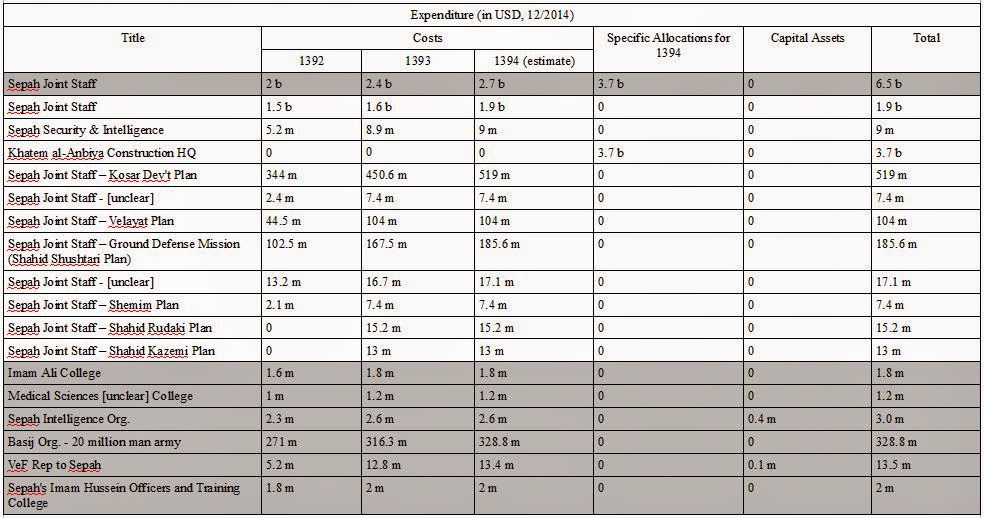