Iran's Army Ground Forces (NEZAJA) includes a substantial rotary-wing aviation component commonly known as the Havanirooz. The hundreds of Bell helicopters purchased during the 70s and the facilities built to operate and maintain them still form the backbone of the service. Today, they are tasked with supporting the NEZAJA's corp-level headquarters with attack and air-transport capabilities (the latter including airborne assault, and logistics).

The Havanirooz falls under the authority of the NEZAJA's central command. (1) However, it is assessed with high confidence that their constituent elements are also operationally subordinate to the NEZAJA's regional headquarters.

The force's current commander is BG2 Houshang Yari, who has held this position since September 2011. (2) Prior to his appointment, he was the force's deputy commander. (3) The staff headquarters is located in Tehran, within the NEZAJA HQ.

Below this, the Havanirooz's staff-level organization is unclear. Unlike the Army's and IRGC's distinct branches, whose staff is relatively predictable (e.g. operations, personnel, etc), very little in the way of open source reporting exists for Army Aviation. The one exception to this is the force's Research and Self-Sufficiency body, which is alternately described as a “department” (4), or an “office” (a level below “department”). (5) At any rate, reporting on this body is scant.

Under the Havanirooz's staff are upwards of nine bases of varying size. The largest of these are sometimes referred to in English reports as combat or support 'groups'. Generally, 'group' is used by the NEZAJA to refer to a brigade-sized combat support unit, such as – for instance – the 33rd Artillery Group. Although this term is almost never used in reference to the Havanirooz today, they are consistently used to describe the same bases during the war, suggesting that the concept of equating each base to an aviation brigade remains sound. 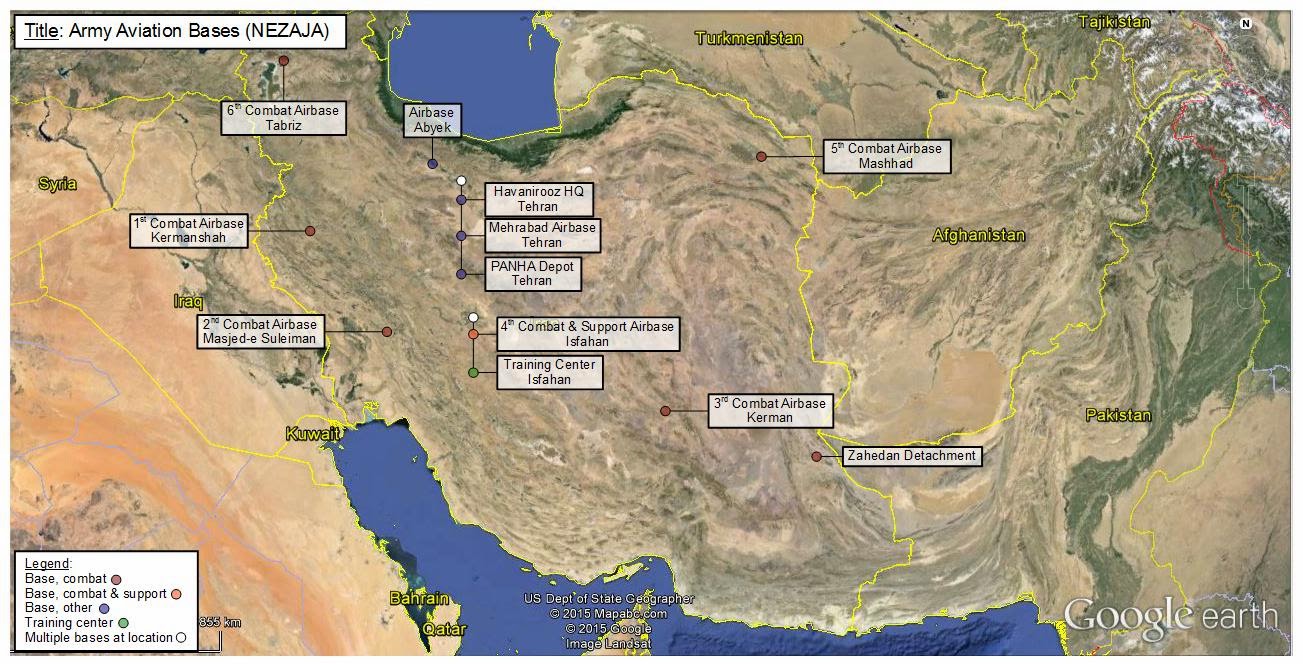 1st Combat Airbase (Kermanshah):
This group is commanded by BG2 Yusef Qorbani, who has held this position since at least June 2010 when he was still a Col. (6) (7) As of December 2012, the base's deputy commander was Ali Heydar Zaraei. (8)

This base is co-located with the Kermanshah Airport.

2nd 'Shahid Asayee' Combat Airbase (Masjed-e Suleiman):
This group is commanded by Col. Heshmataollah Azadifar, who was appointed in November 2014. (9) Previously, he was the base's deputy commander.

This base is co-located with the Kerman Airport.

A contingent from this group is deployed from to an unnamed base in Zahedan to support internal security operations in the south-east region. This base is co-located with the Zahedan airport.

4th Combat and Support Base (Isfahan):
This group is commanded by BG2 Nurbakhesh Bagheri, who was appointed in November 2011. (12) (13) Previously, he served as the commander of the Havanirooz's nearby training center at Shahid Vatanpour Airbase.

This base has been described as the Havanirooz's largest and most important base. It is co-located with the IRGC's Badr Airbase.

5th Combat Airbase (Mashhad): (main article, 11/2015)
This group is commanded by Col. Abdulreza Khodadi. (14) Along with the Tabriz airbase, it is one of the Havanirooz's smaller combat bases.

The base is co-located with the Mashhad airport.

6th Combat Airbase (Tabriz):
This group is commanded by Col. Maqsoudi. Along with the Mashhad airbase, it is one of the Havanirooz's smaller combat bases.

The base is adjacent to the Tabriz Airport.

Abyek Airbase (Abyek):
This airbase was formed when the Ghale Morghi base in Tehran was closed down around 2011, and some of it's personnel and equipment were transferred here. (15) Abyek is not a combat airbase.

This airbase is co-located with the Army's central equipment depot.

Mehrabad Airbase (Tehran):
When Ghale Morghi was closed, a number of fixed-wing aircraft were transferred to the Havanirooz's pre-existing facilities co-located with Mehrabad Airport. (16)

Shahid Vatanpour Airbase (Isfahan):
The forces primary training center, this base is currently commanded by Col. Mojtabi Rouhani, who was appointed in May 2014. (17)

Ya Ali Industrial Center (Isfahan):
Subordinate to the Havanirooz's Self-Sufficincy Jihad, the exact location is unknown. It is possible that it is co-located with the HESA facilities in Shahin Shahr.

PANHA:
The Havanirooz are closely affiliated with, but organizationally distinct from, the Iranian Helicopter Repair and Support Company (PANHA), which falls under the authority of the Iranian Aviation Industries Organization (IAIO).

PANHA is responsible for depot-level repair and maintenance.

Hazrat Vali Asr UAV Group:
Responsible for operating the Havanirooz's UAVs, little is known about the organization of this group. Its location, if it is centrally located at all, is unknown. It's current commander is Col. Reza Khaki.

For further reading, see Adam Rawnsley's recent piece on them. (19)

Footnotes:
1) Translation - Iranian Army Ground Forces (NEZAJA) Organization Charts. The Arkenstone. 02/26/2014.
2) New Havanirooz Commander Appointed. Mashregh News. 09/12/2011.
3) Havanirooz Commander: The Role of the Havanirooz in the Sacred Defense Epic. AJA. Date Unknown.
4) All Havanirooz Bases Equipped with Simulators. FNA. 09/21/2011.
5) News Meeting Held with Army Research and Self-Sufficiency Jihad Officials. AJA. 09/23/2014
6) May 2014 exercise photography.
7) Reconstruction of 5 Helicopters by the Kermanshah Havanirooz, Havanirooz Commander: The Havanirooz is Always Ready to Protect the Water and Land. ISNA. 06/09/2010.
8) The Shahid Fahmideh Center for Innovation and Scientific Collaboration Opened in Kermanshah. ISNA. 12/05/12
9) [Change] in the Masjed-e Suleiman Havanirooz. cjmis. 11/26/14.
10) Commander of the Havanirooz Base in Kerman Appointed. FNA. 12/01/2011
11) Interview with the Commander of the Kerman Havanirooz Base. AJA. Date Unknown.
12) Emergency-Rescue Helicopters Dispatched to Eight Emergencies. EMS Zabol Blogfa. 11/23/2011.
13) Memories of the Imposed War According to the Commander of the Isfahan Havanirooz. Tasnim News. 04/18/2014.
14) Two Overhauled Helicopters Returned to the Havanirooz Fleet in Mashhad. IRNA. 06/22/2014.
15) The Havanirooz Has Today Reached a Stage of Development in Which They Don't Require Assistance from Any Country to Repair Helicopters. AJA. 06/08/2013.
16) What Aircraft are the Commanders Riding in? FNA. 10/15/2013.
17) Ceremony Held for the Introduction of Havanirooz's Training Center's Command. Shabestan. 05/26/2014
18) Three-Fold Increase in Helicopter Firepower / Work in America with Iranian Certificate / Delivery of 20 Helicopters during Sacred Defense Week. FNA. 09/06/2014
19) The Artesh Ground Forces Vali-e-Asr Drone Group (Updated). rawnsl notebook.01/06/2015.
Posted by Author: Galen Wright at 3:32 PM No comments:

This report is a brief look at one of the more important operations in the Iran-Iraq War. The purpose of this report is to illustrate some of the Army Ground Forces history, and the way it has shaped their development over the past three decades. It is loosely intended to precede a more thorough treatment of the current doctrine and structure.


"A year and a half after the Iran-Iraq War began in September 1980, Tehran launched Operation Beit al-Moqdas, the final operation in its campaign to expel the Iraqi Army from its territory. Today, the operation holds a special place in the national memory and in the official narrative that instrumentalizes the war's symbols. The operation has also shaped the world-view of the contemporary Iranian military. In particular, for the Army Ground Forces (NEZAJA), it has been used to help articulate their doctrine and reconcile their identity as a professional service within a Revolutionary system."

This is a working copy.  Most everything is there, but near the end of the project I happened to come across Gen. Bakhtiari's exhaustive treatment of the operation, which I'm slowly working my way though. This text will likely answer many of the implicit and explicit unknowns that beset this report. At the very least, it would allow for a great deal more fleshing out. Indeed, the parts of it I have already read were exceedingly valuable.

...and yes, in case you're wondering, saying something is a "working copy" is just another way of saying "I don't feel like editing this anymore".

Errata:
HT at ACIG Forums for providing  Gen. Bakhtiari's account of the war described above, and for general research assistance ("Tom" & "Gabriel Garrido").
Posted by Author: Galen Wright at 3:47 PM No comments: