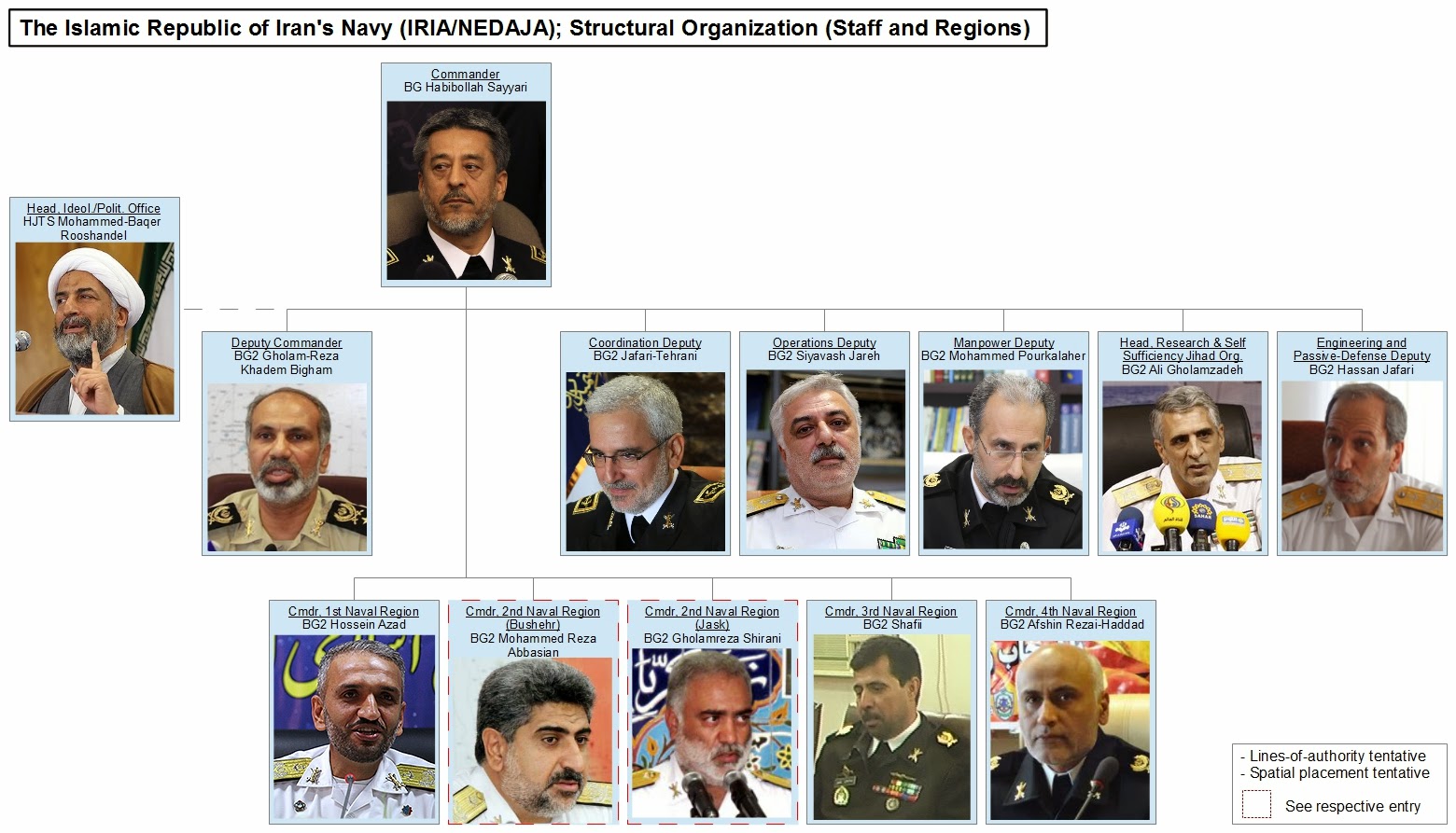 In the fourth part of 'Basij Organization' series, we look at the organization and role of the Imam Ali security battalions (IA bn).
The first part of this series covered the Imam Hussein battalions.
The second part covered Beit al-Moqdas battalions.
The third part took a look at Basij in Semnan province.

Origin:
The groundwork for the creation of the Imam Ali security battalion was laid in 2007 when Gen Ali Jafari was appointed to the position of IRGC commander in 2007. Jafari then initiated a well-known restructuring that included strengthening Basij response capabilities across a range of kinetic and non-kinetic domains, while also further integrating them within the IRGC command chain.

However, following the suppression of the the anti-government demonstrations that followed the 2009 presidential election, in large part by Basij forces, the IRGC sought to translate their 'lessons learned' into developments that could better enable them to respond to such anti-government protests in the future. In fact, according to comments made by Gen. Jafari in August 2014, the recruitment of IA bn personnel came directly from those who played an active role in suppressing the 2009 protests. [1] 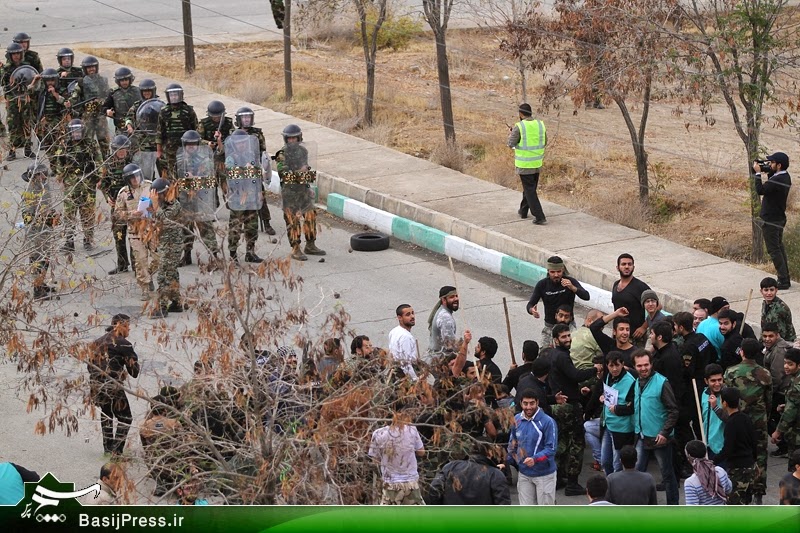 As one might expect from a battalion formed in the aftermath of the 2009 protests, IA bns are oriented towards the suppression of mass demonstrations in urban areas. Descriptions of their role include the confrontation of “internal threats” [4] and “establishing urban security”. [5] They are largely equivalent to the police forces' Special Unit, which also conducts riot-control, though the Special Unit is smaller and more tactically versatile than IA bns. 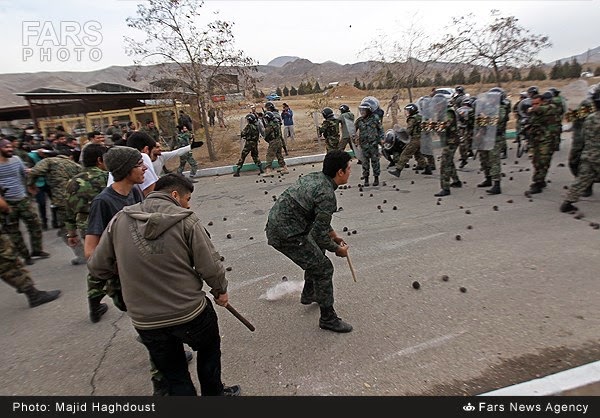 Although they might otherwise be described as a riot control unit, officials note that their responsibility is not limited to dealing with physical confrontations. [6] Specifically, this means “confronting the enemy's soft threats”, which includes “economic, political, and social pressures”. [7] This means, to be blunt, the suppression of non-violent, civil protests.

Although this has negative connotations from a liberal point of reference, where it is viewed as further evidence of the IRGC's growing stranglehold over the Islamic Republic's last gasping institutions of democracy, it is an entirely legitimate response when viewed through the lens of the IRGC's 'soft war' narrative.

This narrative posits that since WWII the spectrum of warfare has been broadened by the West to encompass not just the traditional concept of kinetic war – which is labeled as 'hard war' – but also includes abstract concepts that fall far outside traditional security domains (aka securocratic wars). Specifically, it argues that social liberalization is a threat to the Revolutionary System equal to that of the Saddam's invasion, but instead of relying on tanks to topple the government, soft war relies on tactics that decrease the legitimacy of said government, ranging from human-rights promotion, to the sale of candy bars, to criticisms of the government's handling of the economy.

Although easy to dismiss as just another example of autocratic insecurity, like Qaddafi laying the blame for anti-government protests on the youths these days what with their LSD and their MDMA, Tehran's argument – at its most basic – is absolutely true. Social liberalization DOES pose an existential threat to the Revolutionary System, whose core pillar of legitimacy rests on a state of perpetual confrontation between the Global Oppressed (Iran), and the Global Oppressor (the West with a capital-'W'). Calling this Manichean narrative into question by entertaining a political posture that is anything less than total resistance against what is ostensibly an absolute evil, calls into question the very raison d'etre for the Revolutionary government.

Indeed, this perspective is actually firmly rooted in the historical record. It builds on established western theory when it comes to the concept of 'soft power', as well as the collapse of the Soviet Union, whose demise was due in large part to the attractive power of Western norms like human rights and the free exchange of people and ideas across borders. During the Cold War, promotion of these norms following the 1975 Helsinki Agreement helped galvanize domestic opposition across the Eastern Bloc, who called for greater freedoms and political rights, a process which eventually culminated in the collapse of post-WWII communist project.

Although numerous criticisms of this perspective can be made – the main one being that if Tehran's Revolutionary ideology is less attractive than liberal political and social norms, than perhaps it doesn't deserve to be defended in the first place – one cannot take the intellectually lazy approach and simply write it off as the product of an evil government. In fact, Tehran's narrative would find the distinction between peaceful and non-peaceful protests, and the distinction between civilian and soldier exactly as useful as the distinction between a tank and a fighter aircraft, they may operate in different domains, but both are legitimate combatants nonetheless.

Organization (external):
As with other Basij battalions, an accurate image of the total number of IA bns is unavailable. Because they are focused on urban security, a reasonable assumption is that they are concentrated near major urban areas, particularly Tehran given it's political importance and high-density.

In October 2011, it was reported that Gen. Jafari attended a ceremony with 31,000 Basij from IA bns in the Tehran area, though this reporting is likely inflated, or otherwise inaccurate given that a year later in September 2012, Jafari reported that “more than 100” IA battalions had been formed, ostensibly nationwide. [8] [9] This suggests that the personnel strength mentioned the year before likely corresponds to a national strength. Jafari also noted in his 2012 comment that 400 IH battalions had been created, hinting at a 1:4 ratio between IA and IH-type battalions. This provisional ratio is largely born out by the author's observation, which indicates that IA bns are deployed at a lower rate than other types.

Organization (internal):
Unlike other Basij battalions – such as the IH or BaM bns – an accurate image of IA bn strength cannot be provided at this point. The same is true of the bns subordinate units, including companies and platoons. It is a reasonable assumption is that it does not diverge too far from the pattern established in other battalions. That is, one should expect a strength of around 200 personnel, organized into three companies.

IA bns make heavy use of motorcycles for urban mobility, recalling the ubiquitous imagery of the 2009 election protests. These are typically operated by teams of two, a vehicle operator and a dismount who carries a circular shield and baton. These are supplemented by a smaller number of lightly armored vehicles such as Land Cruisers. 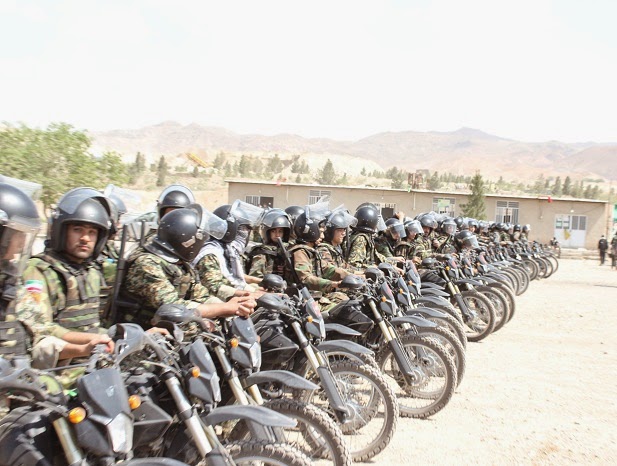