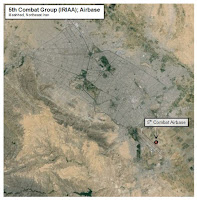 Based in Mashhad, the Havanirooz's 5th Combat Group is responsible for providing rotary-wing support to the Ground Force's Northeast Operations Headquarters. Its relatively small size means it lacks some of the capabilities of the IRIAA's other bases.

The group was established between 1992 and 1996 in response to the lack of regional aviation and the pressing need for border security during Afghanistan's civil war. [1] As of 2014 the base was commanded by Col. Abdulreza Khodadi. [2]

In the conventional role the 5th CG is expected to perform attack and air assault missions to support corps-level maneuver, consistent with the IRIAA's broader doctrine. While the IRIAA has traditionally maintained a robust air assault capability, the 5th CG's small size means that they would be restricted to small actions. This was demonstrated during exercises in November 2015 when units from the northeast operations HQ were reinforced with heavy-lift CH-47s from elsewhere in the country.

The group is also responsible for supporting border security operations, particularly along the Iran-Afghanistan border. These operations include surveillance patrols to support other security forces as well as dedicated “fire teams” that can rapidly interdict “bandits and traffickers”. [3]

The helicopters from the 5th CG are also employed for a range of non-military tasks across the province. These tasks include MEDEVAC for the hospitals in Mashhad, disaster relief operations (e.g. firefighting or SAR), and VIP transport for government officials traveling in the province. [4]

The group is composed of at least two combat battalions and a ground-based support section. The exact strength of each battalion depends on mission-capable rates, which vary over time. The numbers below describe the documented strength, which is assumed to be somewhat lower than the theoretical strength typically used to describe fleet sizes. 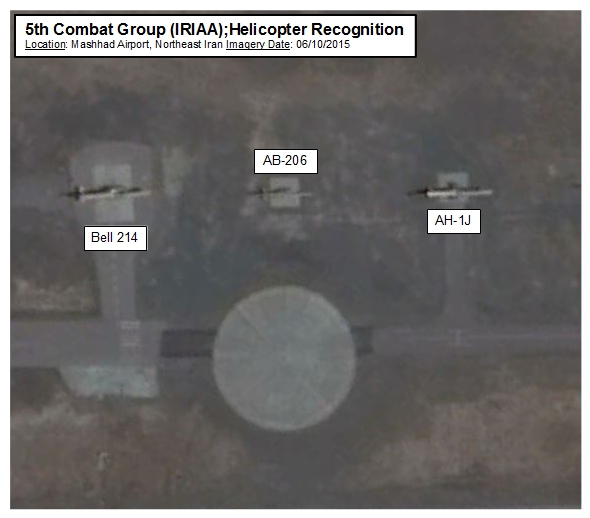 The attack bn is composed of ~7 AH-1J Cobra and ~4 AB-206 light-utility helicopters. The latter are used for reconnaissance and to spot targets for the former, which provide the battalion's striking power. Most of the group's AH-1s are non-TOW capable and are armed only with 20 mm cannons and 70 mm rocket pods. The AB-206s can be fitted with light weapons, but this has not been documented in practice.

The group also includes a maintenance and support section organized at an unknown level(s). In larger groups, each battalion is provided with a workshop to perform basic service work necessary to keep machines operational. These are absent in Mashhad, which suggests that this level has either been folded into, or is performed by, the group-level workshops found in the garrison's sole hanger. Generally, group-level maintenance includes any installation and repairs short of an overhaul, which would be carried out at the PANHA facilities in Tehran. [5] [6]

Footnotes:
[1] A Romantic Flight Over Iran's Spiritual Capital. Khorasan News. 04/18/11
[2] Northeast Regional Operations Headquarters. Arkenstone. 09/29/14
[3] Familiarization with the 5th Combat Airbase; [unclear]. Quds Daily (archived at aerospacetalk) 04/19/09
[4] ibid Khorasan News, 2011; and Quds Daily, 2009.
[5] The IRIAA employs the same Level-of-Repair-Analysis (LORA) methodology used by the US Department of Defense, likely a legacy of the extensive contracts undertaken by Bell during the 1970s to build extensive support and production facilities for the then-Imperial Army Aviation.

See also, the commander of the IRIAA's “Ya Ali Industries Center” describing the three levels (YJC, 03/22/15).
Posted by Author: Galen Wright at 2:09 AM