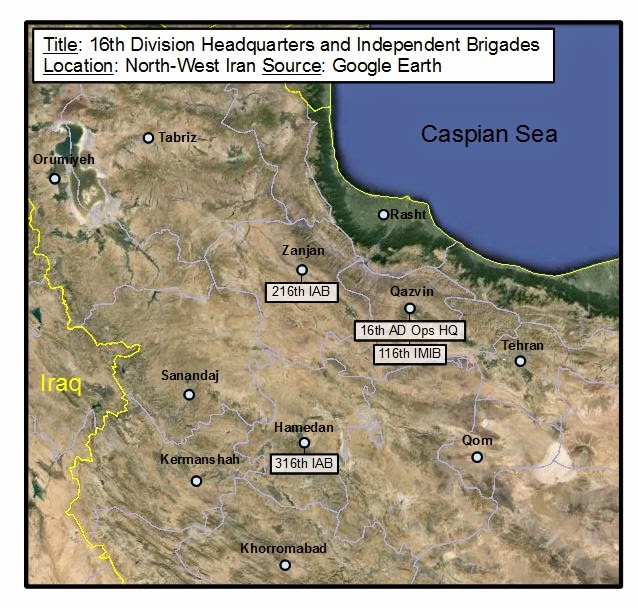 The Iranian Army Ground Forces' 16th Armored Division is based in north-western Iran, and is associated with both the Army's North-West, and Western Regional Operations Headquarters. As of 07/2014, the Division is commanded by BG2 Abdulreza Shahri.

16th Division Operations Headquarters:
The former divisional-HQ has been converted into an operations HQ, the exact function of which remains unknown. The working assumption is that the HQ staff provides coordinating support for brigades during maneuvers, while devolving its previous responsibility for combat-support, and combat-service support to the brigades.

However, this assumption cannot be verified. Between 2011 and 2013, there is only marginal activity in the former divisional garrison in Qazvin that would indicate a significant transfer of equipment.

In at least one instance the body is referred to as a 'tactical headquarters'. Although the distinction between the tactical and operational levels of war is significant in the West, it is unclear if it is equally significant in Iran.

The uncertainty is compounded because the brigades formerly subordinate to the division are associated with different regional operations HQs. The 116th and 216th brigades are associated with the north-west region, while the 316th AB is part of the western region. There is similar uncertainty concerning the relative roles of the divisional HQ versus the regional HQ, both ostensibly functioning at the same 'level'.

As of July 2014, the HQ is commanded by BG2 Abdulreza Shahri.

Because the HQ is co-located with the 116th Brigade, a review of relevant satellite imagery is found in the following entry.

Reconnaissance for the 116th IMIB includes an armored-cavalry section equipped with FV101 Scorpion light-tanks. Traditionally deployed at battalion strength within the divisional structure, they are deployed within brigades at an unknown level. At least four (one plt) are visible during BG Heidari's visit in 04/2014, while up to eight (two plts) are possibly visible in GE's 10/2009 and 06/18/2011 imagery.

Heavy armor for the 116th IMIB is provided by a battalion of FV4201 Chieftain tanks, which are stored under the cover of two long garages. Imagery from Heidari's visit shows the battalion at close to full-strength with around 40 tanks. This compares to wartime battalion strength of 45 tanks, with companies of 15. The battalion also includes two ARVs, and two AVLBs, both FV4201 variants, as well as three M113 APCs, and three M577 ACVs.

The most notable aspect of this brigade is the 185th Mechanized Infantry Battalion, which is trained to participate in UN peace-keeping operations. Created in 1993, the Bn has sent officers on a handful of UN missions for observation and training, including Eritrea, North & South Sudan, and Ethiopia. However, they have yet to to actively deploy as a unit for a UN mission. As of April 2014, the battalion is commanded by Col2 Mohammed-Reza Kazemi.
The battalion is equipped with M113 APCs and M577 command vehicles, with an estimated strength of around 33 vehicles. A maximum of 25 are shown in GE's 06/2013 imagery, six of which are painted UN-white, suggesting that, at most, only a company has received the high-visibility paint scheme.

Wikimapia annotations identify the battalion's barracks-cluster. The cluster includes an H-shaped kitchen, at least two ancillary buildings, and four barracks, which is consistent with three rifle companies, plus a headquarters and weapons companies. The battalion commander noted that the unit is composed of seven companies, leaving one unaccounted for.

There is a second cluster with the same number of buildings, suggesting the existence of a second infantry battalion. There are at least three more recognizable clusters with between 3-5 T-shaped barracks. At least one more infantry battalion associated with this brigade is deployed in Manjil and is described below.

In addition, there are two tall, and 10 low & long buildings similar to military dormitories elsewhere. Some of these are undoubtedly associated with divisional personnel.

The base also contains a large number of residence-style housing with private courtyards.

Up to 34 towed guns, most likely the 130 mm M-46, are visible across a range of imagery. No distinct organization of these guns is apparent, but the number of observed is equivalent to about two battalions with batteries of six guns each. Newly imported Kraz-5233 and/or 6322 trucks are employed as gun-tractors.

Since towed artillery has only been observed at the Qazvin garrison, they were likely associated with the (former-) division rather than the co-located brigade. As of 2013, these guns remained in Qazvin, indicating that transfer of division fire-support was not part of the independent brigade restructuring.

Brigade air-defense includes a battalion of 12 ZSU-57-2 and/or ZSU-23-4 SPAAGs, which are consistently visible across the range of GE imagery. Both types have been documented in hand-held imagery, though only the ZSU-57-2 has been specifically linked to the brigade itself. 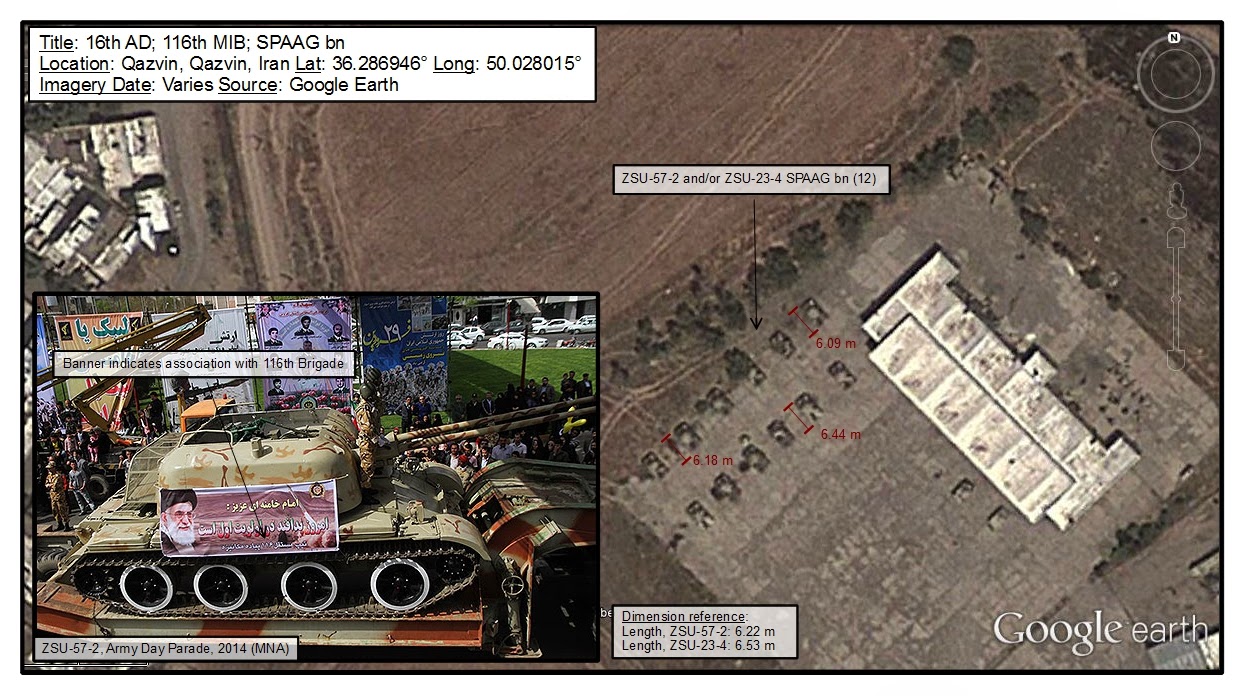 Air-defense is also provided by upwards of 27 towed Zu-23-2s, which are visible in GE's 06/18/2011 imagery. A similar number is found at the Zanjan garrison, suggesting these may be held at battery strength in infantry battalions, and/or battalion strength at the brigade level. 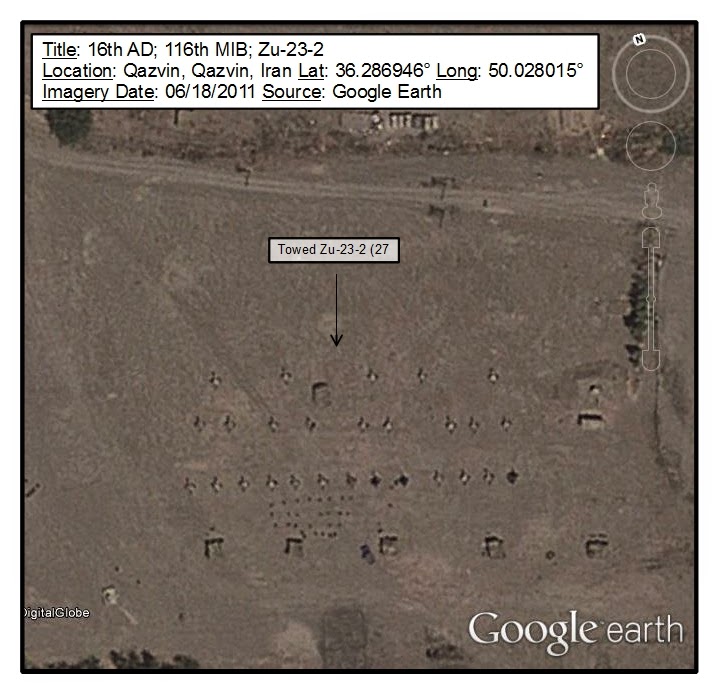 Engineering support for the brigade includes an engineering battalion deployed at the Manjil garrison, which is described below. Additional equipment is present at Qazvin, which is organized at an unknown strength and likely includes divisional assets. This includes three excavators, three-seven graders, four bulldozers, two-four bucket-loaders, and around 10 heavy trucks.

Between 2011 and 2013, the quantity of construction equipment drops precipitously, possibly indicating that the restructuring involves the transfer of non-combat support equipment to the brigade level. This is circumstantially supported by the construction of a motor-pool for engineering equipment at the Zanjan garrison during the same time. However, given the irregularity with which equipment observed in the open, this cannot be confirmed.

Similarly, between 2011 and 2013, two of the motor-pools containing tractor-trailers and other equipment likely associated with the division's transport and logistics sections were vacated, suggesting that this equipment has been pushed down to the newly-independent brigades.

These two events would be consistent with the stated aims of the reorganization, which is to increase the “stand-alone” capability of combat-brigades, by providing them with organic mobilization and maneuver capability.

The brigade maintains a separate detachment stationed at the Army's garrison in Manjil, which they share with the Navy's commando school. This includes the engineering battalion noted above, which was deployed for mine-clearance operations along the country's western border until 2013/2014. It also includes at least one “rapid-reaction” infantry battalion equipped with M113 APCs, 29 of which are visible in GE's 08/06/2013 imagery.

As of April 2014, the detachment is commanded by Col. Javad Rostam-Zadeh.

216th 'Shahid Mokhabari' Independent Armored Brigade:
The 216th Brigade is currently based in Zanjan, but is in the midst of a transfer to a new location some 20 km to the west of the city, near the village of Esfajin. As of July 2014, the brigade is commanded by Col./BG2 Ali Mazheri.

Located in the city, the brigade's base has been an impediment to the city's urban development, leading to its inclusion in on-going nation-wide construction of new garrisons. However, like in many other cities, the Zanjan transfer has been delayed by bureaucratic disputes between the Army and the civilian government. As of Summer 2014, the actual transfer has not yet begun.

As an armored rather than mechanized brigade, the 216th is composed of two, rather than one tank battalion. The two battalions can be consistently identified across a range of imagery thanks to their distinct motor-pools. However, no more than 50+ FV4201s are visible in any given imagery. Each battalion is shown equipped with an AVLB, two ARVs, and three M113/M577 ACVs.

Another difference between mechanized and armored brigades is the type of AFVs employed by infantry battalions. Verified with parade imagery, more than 30 BMP-1s are visible in GE's 06/2012 imagery. They are typically parked in two distinct clusters adjacent to their respective garages. It may be that these are two distinct infantry units, or simply a function of available parking space.

A number of BTR-60s have been seen on parade, hinting at the possibility of another mechanized unit, but have not been observed in any overhead imagery.

Battalion weapon companies and support elements (e.g. MEDEVAC) are motorized in part by ATVs and bikes. This includes MANPADS, MANPATS, and 60 mm mortars.

At the brigade level, additional armament support is provided by M40 recoilless-rifles, TOW & AT-4/5 ATGMs, 81 & 120 mm mortars, and DShK machine-guns. These are organized at an unknown level, and are primarily motorized by organic tactical vehicles like Toyota Land-Cruisers and Jeeps.

HQ units, both at the battalion and brigade level, rely heavily on unarmored Jeeps in addition to the M577 ACVs.

Artillery support is provided by a self-propelled M109 battalion.

Brigade air-defense includes at least 27 towed Zu-23-2s, which is the same strength as the Zu-23-2s observed in Qazvin and are likely organized in a similar manner. ZPU-4s have been observed on parade and are organized at an unknown rate. On parade, Zu-23-2s are shown towed by a number of vehicles including ¾-ton tactical vehicles, and by larger Kraz and Mercedes Benz trucks, suggesting the possibility of different deployment levels alluded to in the Qazvin entry. No SPAAGs have been documented.

Between 2011 and 2013, a new motor-pool for engineering equipment is constructed, and populated with construction equipment possibly transferred from the division during the post-2011 restructuring. Equipment includes an excavator, and at least one bucket loader.

Another motor-pool contains a range of vehicles, including M577 ACVs, and additional light and heavy trucks including those in the MB 911 size-range and those fitted with containerized equipment-shelters. These are likely associated with brigade headquarters and non-combat support elements such as signal units (which are organized at a unknown rate at brigade level).

Next to this is a second motor-pool primarily populated between 2011 and 2013. Although the warehouse and other buildings pre-date the reorganization, new vehicles which may have originated in the former-division include tractors, tractor-trailers, and a range of medium and heavy trucks. Other than this, the brigade would have little in the way of organic transport and support in comparison to the observable equipment at the division HQ in Qazvin.

316th 'Shahid Qehrman' Independent Armored Brigade:
The 316th Brigade s based in Hamedan, and as of 05/2014, it is commanded by BG2 Hamza Beidari.

Unlike the other two brigades associated with the 16th Division HQ, the 316th is part of the Army's western military region, as opposed to the northwest region. According to comments made by the commander, the role of the 316th brigade in the region is to provide operational depth by functioning as a combat reserve.

The division's 252nd armored-cavalry reconnaissance battalion has traditionally been stationed in Hamedan, though it is unknown whether this deployment survived the war, let alone the 2011 reorganization.3 At least some FV101s continue to be observed on parade in Hamedan, indicating that some of this capability has been maintained.

Heavy armor for the 316th Brigade includes two battalions equipped with Chieftain tanks, which have been historically designated the 224th and 227th Bns. In GE's 06/2011 imagery, one of these battalions is clearly visible with a strength of 34-35 FV4201s, plus two ARVs, one-two AVLBs, and six M113/M577 ACVs.

The second battalion is parked under the cover of two long garages similar to those used in Qazvin. However, these garages are shared with an unknown number of light AFVs, including BTR-60s, making it difficult to accurately quantify its strength.

Similarly, the brigade's infantry strength cannot be assessed with available resources. BTR-60s and BMP-2s have been documented with hand-held imagery on parade and display, but are hidden under cover in satellite imagery. 25 suspected-M113s can be seen in GE's 05/2014 imagery, but are absent from any parade imagery. Due to image quality and dimension estimates, it is possible that some are actually ZSU-23-4 SPAAGs. 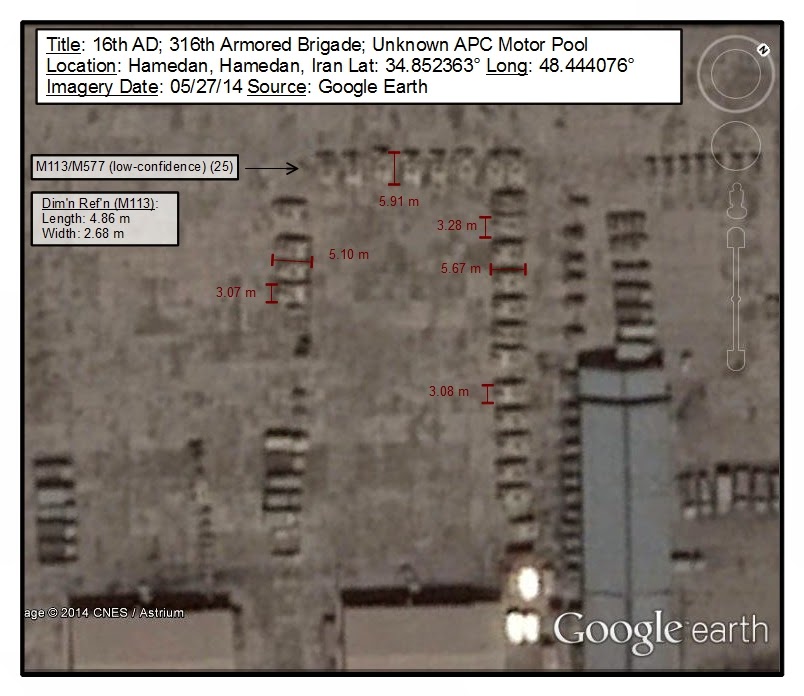 Brigade artillery includes an M109 battalion, which may have more than the usual number of 12 guns. 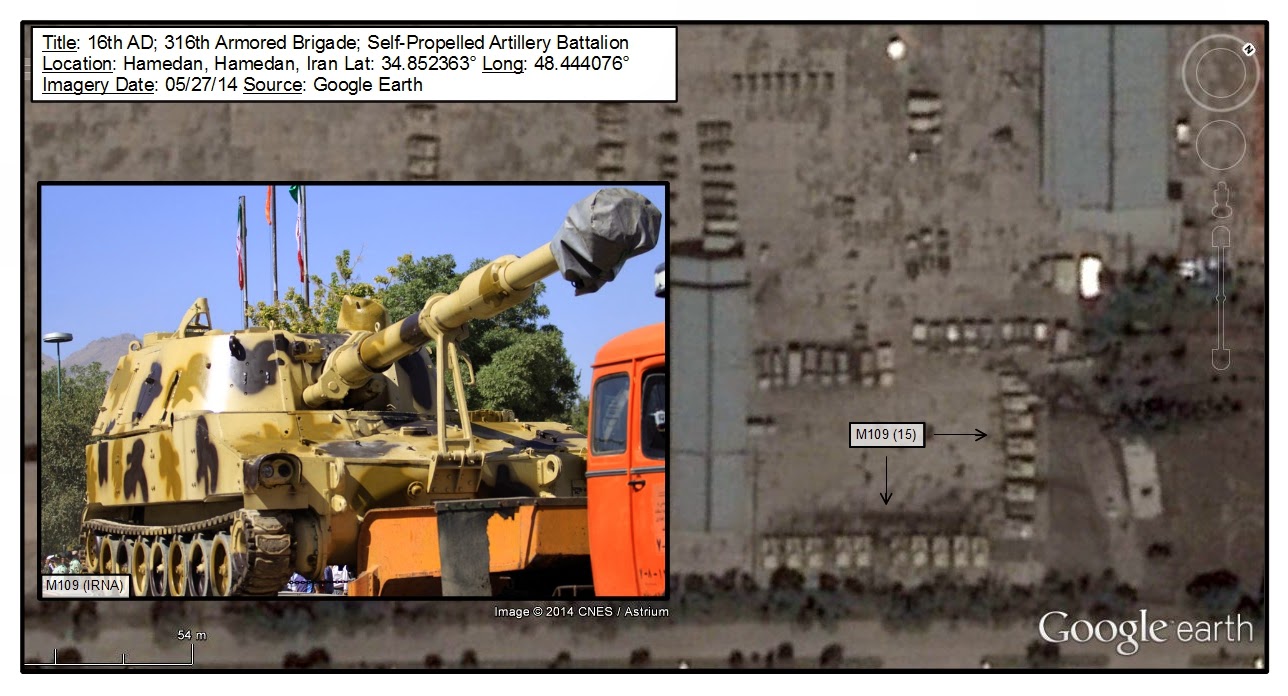 Parade imagery shows the 316th Brigade using tactical vehicles – including motorcycles, ATVs, and Jeeps – for the same purposes described in the entry for the 216th Brigade.

Air defense is provided in part by what is most likely a battalion of ZSU-23-4 SPAAGs, which are frequently observed on parade, but cannot be confidently identified on satellite imagery.