Located in north-eastern Iran, the 30th ID is among the smallest and lightest of the regular army divisions. The divisional headquarters along with the 1st brigade is based in Gorgan, in the Golestan province, while the 2nd brigade is found in Sari in the neighboring Mazandaran province. The infantry brigade in Bojnourd was, until very recently, attached to the 30th ID, but now operates independently. The current commander is Sartip Dovom (aka Brig. Gen. 2nd class) Mansour-Khumri. (Footnote 1)

While it is unconfirmed at this point, there are possible indicators that the division is under pressure to relocate their garrison out of the city in order to relieve urban congestion. (Footnote 2)

Operationally, the brigade falls into the army's eastern theater. Geography, as well as the lack of any high-density weapons like self-propelled artillery, tanks, or APC/IFVs suggests that the 30th ID is a second-tier unit designed to reinforce units like the 77th MID.

The first brigade is located directly in the city-center of Gorgan, adjacent to road 22 which runs from Tehran to Mashhad. Google Earth imagery of the base dates from June 2003 and, over the eastern-most half, from September 2007. Very little ORBAT-related equipment is visible on available imagery.

What is available includes a relatively large array of heavy earth-moving equipment (1) along the same lines as can be seen in other divisional headquarters (examples: Qazvin, Mashhad). Nearby are additional motor pools including one with pickup-truck and Jeep-type vehicles (2) as well as larger 2 ½, and 5-ton vehicles (3). The division depends on these soft-skin vehicles for everything including troop transports, to artillery-tractors. Semi-trailer type trucks, also likely used for material-resupply, are found along the northern portion of the base.

Fortunately, parade photography fills in some gaps. Light tactical vehicles – like the Toyota Land Cruiser – are as weapons platforms, carrying at least DShK machine-guns and 82 mm mortars. In order to imagine how these might be deployed, one might be able to look to the similarly equipped border police. Rifle squads of six or more strong are assigned to pickup-trucks, which are then supported by a handful of machine-gun, recoilless rifle, and MLRS-armed vehicles. It is, quite frankly, impossible to say with any degree of certainty exactly how they are deployed, but it wouldn't be unusual to see mortar or MLRS batteries, as well as recoilless-armed anti-tank platoons at the battalion level. Alternately machine-guns, and maybe even heavier weapons, could easily be found at the company level, as was the case with Soviet infantry companies. At any rate, given the overall lack of mechanization there are likely to be substantial anti-tank units attached at the divisional level. 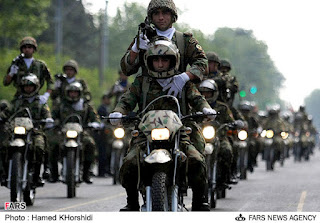 The brigade is also equipped with M-46 towed guns, which are likely organized at battalion strength.

One report indicates that the 30th ID has an organic UAV capability, presumably supplementing other divisional level reconnaissance assets.(3) During one parade, a powered paraglider was flown overhead, suggesting another possible reconnaissance tool.

Like all army divisions/brigades observed thusfar, the 30th ID also has an attached 'commando' unit. While I have long puzzled over the exact battlefield role for these troops, one of the more plausible explanations is that they are intended as a reconnaissance force similar in doctrine to the U.S Marine recon battalions.


The second brigade – based in Sari, along Artesh street – is even smaller. Compared to the battalions in Zabol and Birjand with compounds of roughly 60 acres (ignoring hardened storage), the brigade in Sari is housed in a compound of only 20 acres. To drive this point home, there are only two-four buildings which are at all reminiscent of barracks (length/width ratio) visible on Google Earth, imagery from which dates from July 2010. The only other assets visible on GE include a smattering (less than 10) of heavy transport.