*Working Copy*
The Howeizeh(هویزه), also known as the Sheni-Dar(شنی دار), is a light tracked personnel carrier first shown without fanfare in December 2011 during a visit by Generals Pourdastan and Vahidi to a MODAFL conference. The Sheni-Dar was than officially announced in January 2012 during the IRGC's Shohadaye Vahdat wargames in Eastern Iran, where it was shown alongside the wheeled Sarir APC. Then in September 2012, the Howeizeh was officially announced for a second time an an unidentified 'APC prototype and development office', this time under the name Howeizeh.


Development and Doctrine
The show-casing of the Howeizeh has contributed to a growing understanding of the IRGC's armored doctrine over the past year. It was developed as the result of the requirement by the armed forces - presumably the IRGC in particular - to provide operational mobility for mechanized forces. This has been a criticism of Iran's infantry-centric armies ever since they proved unable to exploit any "Schwerpunkts" they created during their offensives against Iraq. Tom Cooper and Farzad Bishop describe Valfajr-8 offensive of February 1986:


"The Iraqi 2nd Naval Brigade and the 15th MD were almost completely annihilated, and only one armored brigade remained between Faw and Basrah, trying to stop the Iranian push northwards. The Iraqi's were overwhelmed, and if the Iranians had more tanks and APCs, as well as a more effective supply capability, they could have easily rode to the north and marched into the second largest Iraqi city almost unopposed." (The Iran-Iraq War in the Air 1980-1988, 198)

During the Shohadaye Vahdat  wargames, an IRGC general described the Howeizeh as the outcome of an internal evaluation of "positional defence" and "mobile defence" strategies, as a response to a Western/NATO-type mechanized assault. (Iran Military Forum) Both of these terms have specific doctrinal implications. In brief, positional defence emphasizes attriting an enemy attack through direct engagement from static/prepared positions. Mobile defence, on the other hand, avoids frontal confrontation between similarly-dense forces, instead using screening forces to shape the creation of a favourable battle-space on which to use counter-attacks to decisively defeat an attacker. Iraq's doctrine post-1982 unquestionably trended towards the static end of the spectrum, while NATO in western Europe transitioned from the former to the latter in the early-1980s, and underwent significant internal debate as to the merits of both.

Additional comments in the Iranian media have made it clear that the Howeizeh has been designed with mobile defence in mind. In other words, this AFV aims to provide the necessary mobility required for Iranian forces to keep the initiative and dictate when and where an engagement will take place. This explains the emphasis on agility and concealment within the descriptive lexicon as both are geared toward gaining manoeuvre superiority over an attacker at the operational level.

Like "mobile defence", "operational mobility" is used in reference to a specific concept. Ogorkiewicz, in Technology of Tanks, defines it as


"...the ability of tank units to move in the zone of operations. This is a matter of tanks moving under their own power, mainly along roads and tracks but often also cross-country." (The Technology of Tanks, 225)

This is a function of both characteristics like power-to-weight ratio, or maximum speed, as well as logistical requirements like fuel range, mechanical reliability, and crew ergonomics. A smaller, lighter vehicle can cross softer ground, cross more brigdes, go down narrower paths, than a larger, heavier one, and therefore has a much larger theoretical area of operations. Likewise, the need for fuel, spare parts, and other mechanical support all tie the AFV to a certain degree of support infrastructure, limiting it's theoretical AoO.

Understanding these abstract factors contributing to mobility is key to understanding the language used to describe the Howeizeh. The ability to navigate cross-country was a center-piece of publicity videos, with shots of the AFVs operating in typical high-desert environment. It's light-weight (فوق سبک ) means it can climb steeper hills, and travel down narrower mountain roads roads than a BMP, or an M113. It's touted-simplicity also gives it a longer range, and while more features (i.e electronic subsystems) might have made it more versatile, they also would have required more repair-hours. Its small-signature () means it is able to travel in areas that might otherwise be denied to it by enemy fire, broadening it's AoO.


At a more general level, the Howeizeh is the essence of the APC concept. It provides organic, cross-country mobility to infantry forces, which otherwise might rely on divisional motorized transport, which in turn would limit the ability concentrate force at a required moment in space-time. In many ways, the Howeizeh (along with the Tala'eeyeh) constitute a conceptual successor to the Boragh program, which also aimed to provide basic infantry mechanization. Unlike an IFV like the BMP, the Howeizeh is not designed to stay in the fight; its infantry squad functions as its armament, which is 'fired' at the enemy by manoeuvre.

Physical Description
Configuration/Overview: The Howeizeh is a conventional, light, tracked APC. The powerpack is mounted at the front-right. The driver and commander* sit front-left, while the rear troop compartment holds room for six dismounts on inward-facing seats. There are two access/egress points: a rear-facing door, and the commander's hatch. The lack of roof hatches is further evidence that this APC has not been designed with fighting so much as delivering in mind. The overall configuration - particularly the superstrucutre - is very similar to the Wiesal 2 UF/BF, and observation/reconnaissance variants.

* It is unclear if there is space for a vehicle-commander as space would be at an extreme minimum behind the driver's high-backed, bucket-seat. This lack would almost certainly have implications for the IRGC's doctrine, again pertaining to the inability to fight from the vehicle, though at this point I am operating under the assumption there is. 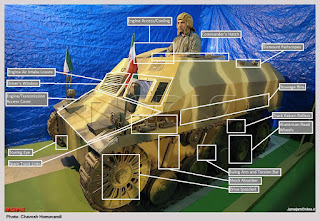 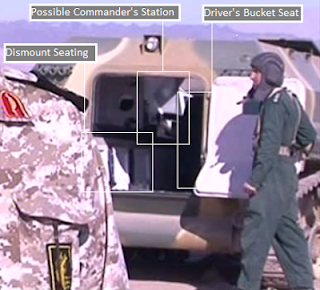 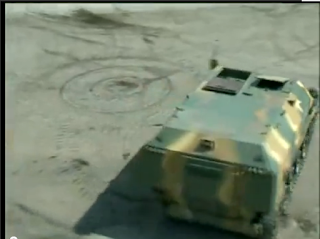 Vision Devices: The driver is fitted with a ballistic window rather than the usual periscopes found on AFVs. This decision might have been made to make it easier and more intuitive to drive (greater FOV). Because they don't need to be filled with a gas, or maintain assembly alignment, they're also cheaper than periscopes. The troop compartment is fitted with two side-facing periscopes on either side, while the rear-facing door contains a single, small window. The vehicle commander lacks any vision devices that can be used buttoned-up. This is a further indicator that the vehicle is not meant to be fought from.

Protection: Composition of the Howeizeh's armor is unclear, though it is most likely welded steel and/or aluminium. (If any readers know of a way of telling the two materials apart visually, they are invited to comment below). The road-wheels have the same reinforcing ribs used on the M-60A1 MBT aluminum wheels, which suggests at least some of the components used are of this material.

Weight/dimension requirements make it unlikely that all-around protection exceeds that of small-arms / shell-splinters. The prominent air louvres and driver's window all represent weakened zones in the frontal arc that might indicate the Howeizeh is optimized against indirect fire weapons like shell-splinters. This would be an interesting perspective given the trend away from massed-area to precision bombardment,  but may represent a "lesson learned" from the Iran-Iraq war in which light-infantry forces were decimated by prepared and overlapping fields of fire.

Mobility: The Howeizeh is powered by an unknown engine, likely a diesel in the ~200 hp range. One change between the Sheni-dar shown in January, and the Howeizeh shown in September was in the inclusion of further air louvres, which could indicate a cooling problem.

While exact specifications cannot be ascertained, the publicity videos show that the Howeizeh is comparable to other light AFVs in terms of tactical mobility, turning-radius, maximum speed, stopping distance.

Armament: The prototypes seen thus far have been entirely unarmed, reflecting the above-mentioned point that the Howeizeh's 'weapon' is actually its infantry squad. The vehicle commander lacks any sort of cupola or pintle mount from which to operate a weapon, and his position to the extreme front-right of the vehicle would make any hypothetical mount cumbersome to use. The lack of roof hatches and side-firing ports also reflect a rejection of the cold-war doctrine that the squad should be able to fight from their vehicle. Despite this, official announcements indicate that the vehicle could be armed with, ambiguously described, rockets.