Continuing with my focus on the Iranian Army's doctrinal evolution and its relationship to the ever-changing art of modern warfare, I now turn my lens to one case study in particular - the 28th infantry division.

The first part of this analysis can be found here: "Iran's Disappearing Divisions"

The 28th infantry division was been based out of the Kurdistan province on Iran's western border with Iraq and was organized under both the armed forces of Imperial Iran, and the Islamic Republic. However, in 2011 it was broken up as part of the Iranian Army Ground Forces 'restructuring plan' (طرح تغییر ساختار) that resulted in a growth in the number of independent brigades throughout the country.

This process occurred in three stages. The first stage began in May 2011 with the conversion of the 2nd brigade in Saqqez to the 228th independent brigade. In November, the second stage saw the conversion of the 3rd brig. in Marivan to 328th IB. Most recently, in February 2013, the 1st brig in Sanandaj began its conversion to the 128th IB in the final stage of the plan. 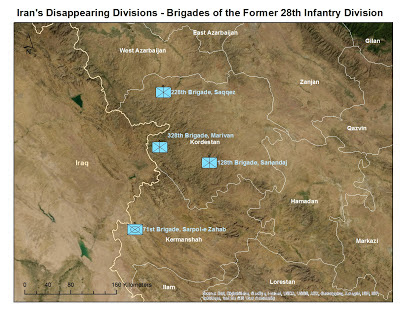 The end-state of this reorganization is four independent maneuver brigades (the three listed above, plus the 71st independent mechanized infantry brigade in Sarpol Zahab, which although not formerly part of the 28th ID, is included in the attached map) under the operational coordination of the former divisional headquarters that appears to be roughly equivalent to a 'corps'. At first glance, because a four-brigade corps is similar in size to a division, one is left with the question "why?". The key distinction to make between these two systems is that brigades are now the basic combat unit whereas previously they dependent on the divisions for combat support (for example: engineering, air defense, transport and logistics battalions).

The stated objective of this reorganization seemingly could have been lifted directly from any number of RAND monographs from the 1990s expounding on the virtues of breaking down command hierarchies. Cyrus's comments specifically emphasized that the plan was designed to preserve the commander's decision-making capabiltiy in the prsence of overwhelming attacks against their organizational hierarchy (سلسله مراتب ). The conclusion the army reached was that in order to react to these threats, combat units needed to be able to operate within the shortest possible reaction time and be agile and dexterous (چابکی و چالاکی) all in the absence of support from the "top".


Note on Source: Persian-speakers are invited to check my claims against the articles themselves since there's always the risk I may have misrepresented an argument. For instance, it's unclear what the "Norwhest Tactical Command Division's" relationship to the "Northwest Operational HQ" commanded by Second Brigadier General Heshmat Malekian is.
Posted by Author: Galen Wright at 5:53 PM