The Sepah's 8th 'Najaf Ashraf' Armored Division is based near the town of Najafabad, west of the greater-Isfahan urban area. Along with the 14th Division, and the 15th and 40th artillery groups, it is subordinate to the Sepah's Seyyed al-Shohada operational-HQ in Isfahan. (1) Wikimapia annotations suggest the division's garrison is named 'Ashura', though this cannot be independently verified. It's current commander is unknown. 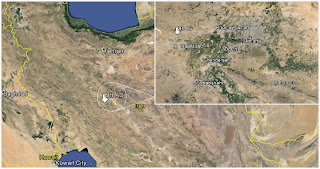 This unit has contributed to the Sepah's mission in Syria, advising pro-government forces in armored warfare tactics. (2) At least two of the division's soldiers have been killed during these operations. (3)

There is currently no evidence to suggest that the division deploys its constituent brigades in separate garrisons in the same manner as the Army. This may be a function of the rule-of-thumb that Sepah divisions are closer in size to brigade's rather than a true division. Based on garrison configuration described below, the major difference between Sepah brigades and divisions is not armored strength, but personnel strength.

Separate from the divisional garrison itself, two additional Sepah-related compounds can be found immediately to the east. This includes an collection of apartment buildings, and one with heavily landscaped grounds and an ornate/decorated hall. To the west of the garrison lies an automotive testing track (indicated by heavily-used track-patterns leading to and from the garages). Further west is a small exercise/training ground, which includes a handful of firing ranges and a cluster of buildings with an unknown purpose. Further west, across the highway, is a munitions storage facility with hardened shelters.

As noted above, the key distinction between the Sepah's armored brigades and divisions is the number of personnel. This is indicated by the four identical 'clusters', each with six, two-story barracks buildings. [1] These 24 compares to the six-nine in Neyshabur.

Each barracks has a footprint of roughly 450 sqm, which is slightly smaller than, but still comparable to, the footprint of those in Neyshabur (520 sqm), or the Army's new barracks in Zahedan (600 sqm) and Mashhad (500 sqm). However, the potential differences in height make direct comparisons difficult when estimating force structure. The collection of smaller buildings associated with each cluster likely include a HQ/administration, bathrooms/washrooms, and a small corner-store/canteen.

To the W/NW of the main garrison is the division's armored motor-pool, which consists of 9 rows of covered garages built around 2002, each with 11 bays. This gives the division a theoretical strength of ~100 AFVs in total. These garages are supplemented by a fenced-in motor-pool to its north.

For tanks, the division uses a mix of T-72Ss and T-55s. [2] The maximum number (31) can be seen on 05/2010 in the uncovered, fenced-in motor-pool. At other times, such as 01/2013, the majority are under the cover of their garages to the south. There is no way to reliably distinguish the T-55s from T-72s, even though the latter should be noticeably larger.
Their total strength compares to that of a single late-Cold-War-era Soviet tank bn, though the manner in which they are organized relative to each other vis-a-vis their mix of high/low capabilities is unknown. One possibility is that homogenous companies make up mixed battalions similar to the Army's former-88th AD's use of two M-48 and one M-47 co/bn. Another possibility is the use of an independent co to augment a homogenous bn of the other.

30 IFV) mechanized infantry bn. Given the limited availability of covered storage, there is unlikely to be more than one bn's worth.

In addition to the BMP-2s, 14 additional BMP-variants are visible at the same time. [4] These are likely specialized Boragh-variants given parade imagery of the Boragh SPAAGs, and the common use of Boragh AMVs in Sepah armored units. The observed numbers might translate to a battery or two of each (depending on battery size and how many remain under cover).

Upwards of 15 M113 or M577s can be seen on 07/2009, which, according to parade imagery, are used as command vehicles, likely in bn HQs, and – possibly – co HQs for light AFVs [5]. Parade imagery also shows the quarter-ton Safir Jeep serving as a command vehicle.

In 2009, 10 unidentified AFVs are visible in the fenced-in motor-pool [6]. They have a turret, and are slightly longer and narrower than the nearby M113s. One candidate is the EE-9 wheeled reconnaissance vehicle known to be in use with Sepah armored units. However, the observed profile is slightly different from the suspected EE-9 based in Gonbad-e Kavus. No definitive conclusions can be drawn at this point.

The 2S1 SPHs observed on parade cannot be conclusively identified in overhead imagery. It is reasonable to assume – given observed patters thusfar – that they are deployed at bn-strength, which is about equivalent to one row of covered garages.

Taking these observations into account, we can account for: ~30 tanks, ~30 IFVs, ~15 special-purpose light AFVs, ~15 command-AFVs, ~10 unknown light AFVs, and ~10 SPHs, which roughly approximates the number of available garage-bays. Although this is only the roughest of ballpark estimates, it is accurate enough to account for available infrastructure.

The division's transport section has their own motor pool inside the garrison-proper for their own equipment [7]. This includes at least 11 tank-transporter trailers associated with the Mercedes-Titan tractors seen on parade. In the 09/2009 imagery – the date of the annual Sacred Defense Week parades – five AFVs can be seen secured on them.

From 2009 onward, an AVLB can be consistently found next to the division's maintenance section north of the garrison-proper[8]. When it is absent (05/2010), it can be found 350 m north-east, spanning a gap. The bridge is a match for the Serat-type also observed in use with the Sepah's 21st armored brigade in Neyshabur.

Another motor-pool in the garrison's N/NE holds he bulk of the division's soft-skin vehicles and logistics support. Judging the exact makeup is difficult as the majority are hidden under cover. However, in 09/2009, several construction-vehicles are present including a tracked crane, and four front-end loaders.

Further east, in a small valley, are 75+ small boats of varying types. Although seemingly out of place so far from the Gulf, these are likely used to supplement conventional river-crossing capabilities of combat-engineering forces. These small boats were routinely used in this manner in the watery low-lands of the southern-front during the Iran-Iraq war.