A legacy of the Iran-Iraq war, the antiquated BTR-60PB APC continues to soldier on in mechanized infantry units of the Iranian Army Ground Forces (NEZAJA) alongside the BMP and M-113.

2) Dimensions & Length-to-Width Ratio (L/W): This is the primary way to distinguish between any wheeled and tracked AFVs. As a general rule, the former will have a higher L/W ratio than the latter.

However, this seemingly iron-clad rule is difficult to implement in practice. Very often, it is possible to estimate the dimensions such that the long-and-narrow BTR-60 will appear as the shorter and wider BMP-1.


Out of a sample of 59 measurements taken from garrisons across Iran, there was a 75% of underestimating the ratio by < 0.30 m, or overestimating it by < 0.20 m, meaning that it is easier to misinterpret a BTR as a tracked BMP than it is to confidently identify it as a wheeled AFV.

Generally speaking, using dimensions for primary identification is critical, but fraught with risk thanks to distortions introduced by environmental factors. Shadows can obscure hull-edges leading to over or under-estimates.Camera-oblique can create unnatural perspectives, stretching one dimension, while shortening another. This can be exacerbated by the target's orientation relative to the camera for the same reason (i.e. is its length parallel or perpendicular to the camera's rays?). Like shadows, the relative contrast between the hue of the AFV and the background can distort the appearance of hull edges. Often, these factors will reinforce or ameliorate others.

Most importantly however, is the human aspect. The precision of Google Earth's 'ruler' tool is low enough that accuracy depends on subjective assessments made on a case-by-case basis. The decision to move the ruler one pixel to the left, or three down (etc) because of hand-twitch may have just as much influence as all the environmental factors described above.

In this author's experience, it is surprisingly easy to confuse the BTR-60 with the BMP-1 at the point where they both start resembling overgrown sea-cucumbers.

3) Recognition Features: These include:

- Pointed Nose; key feature for differentiating BTRs from BMP-1s. Often evident in the shadow it casts. Tends to dissolve into ogive in medium-quality imagery and can disappear in low-quality

- Square rear; although not distinctive to BTR, square-rear can be used to establish orientation.

- Sloped front/rear/sides; sloping sides can distort dimensions and/or cast shadows or reflect light depending on orientation to sun's rays.

Note: When reading these charts, the listed dimensions are those that have been measured by the author. The following numbers inside the adjacent parenthesis are the measurment's deviation from the know. 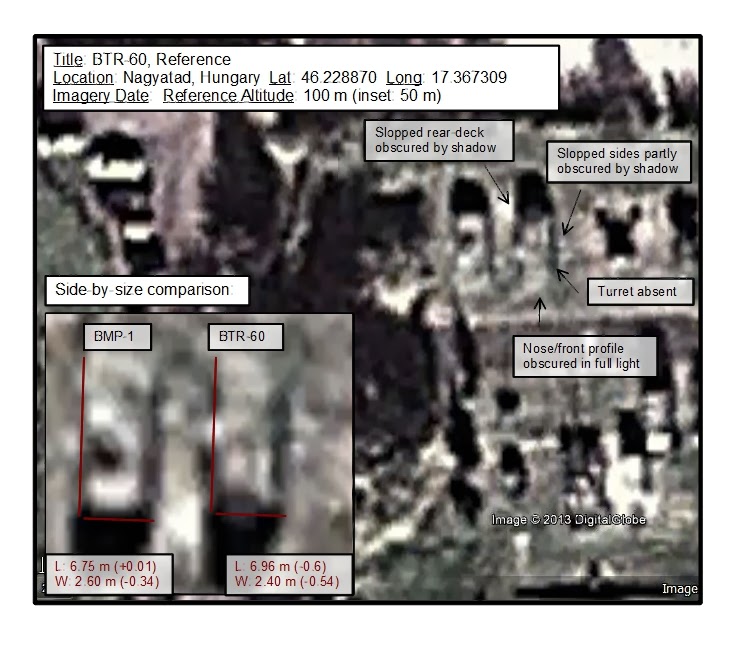 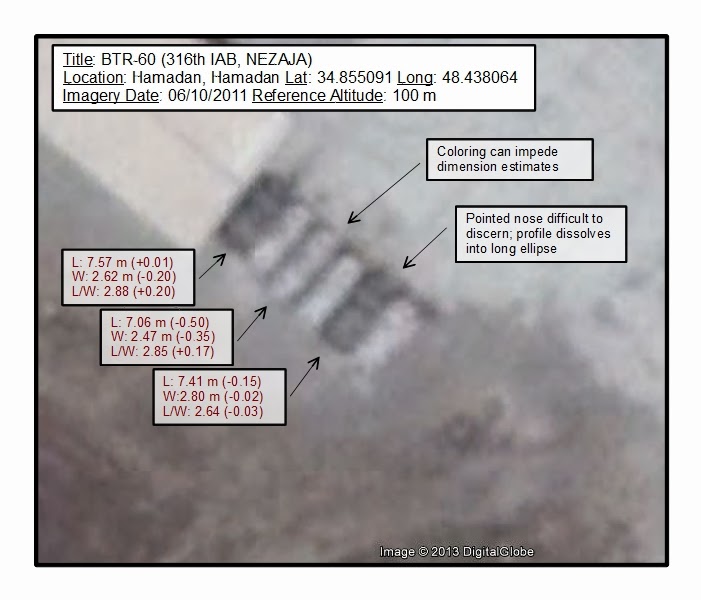 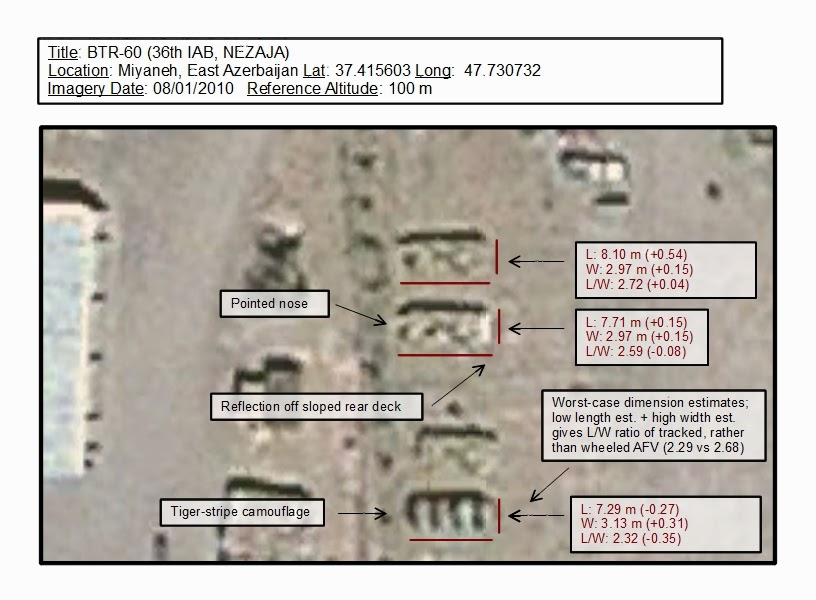 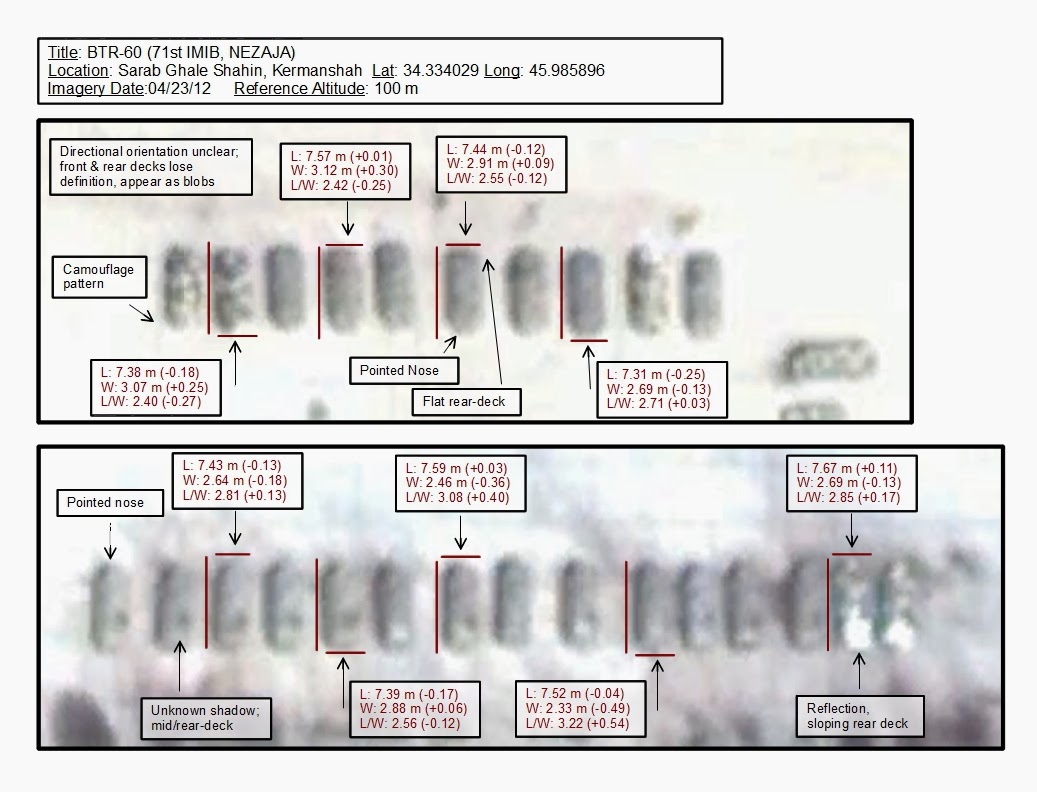 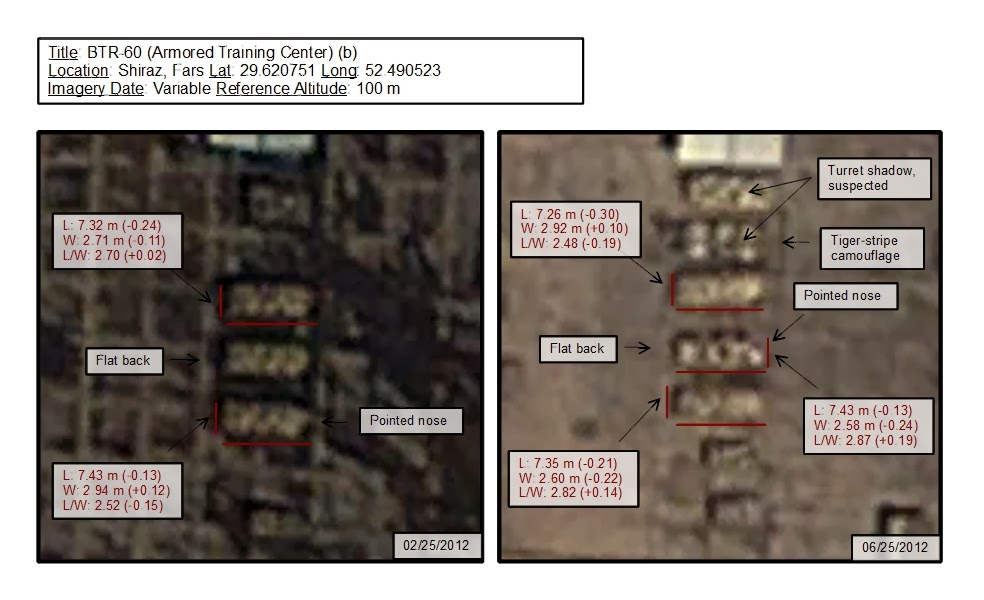 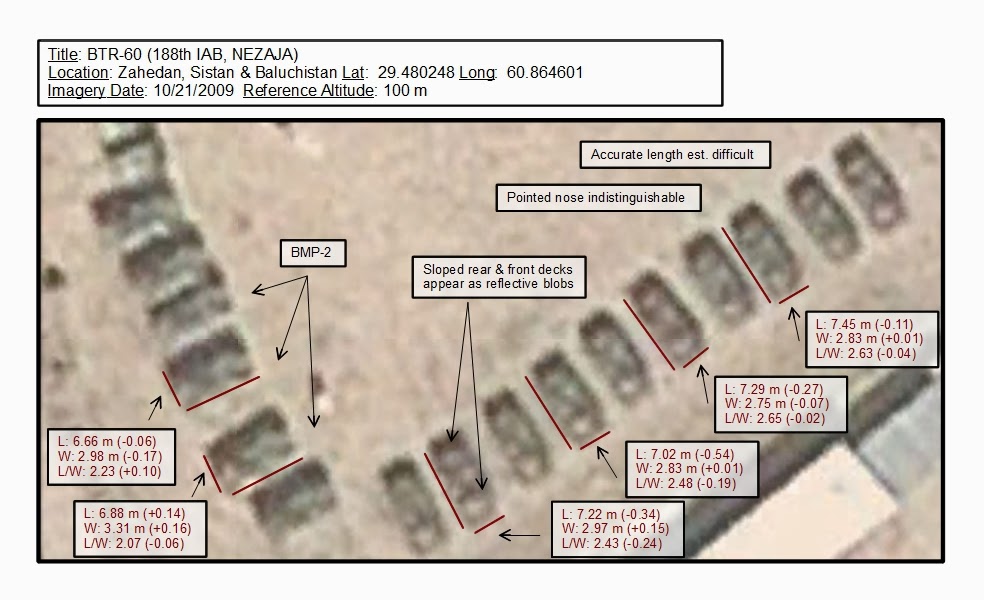