The Western HQ is one of five other regional HQs created under the Army Ground Forces' (IRIA) 'Samen restructuring plan'. Operating on the assumption that they would face a simultaneous, multi-front attack that would preclude centralized strategic control of battles, the IRIA created these HQs to control operations and coordinate tactical actions within their respective theaters. By coordinating tactical actions at this level, the IRIA hopes to achieve their operational objective of regional integrity, which when taken as a whole comprises the national-level defense-in-depth strategy.


“With the objective that units be completely self-sufficient and be able to confront threats independently, we created five regional headquarters in the northeast, southeast, southwest, west, and northwest, and we designed the structure and organization of these headquarters to be self-sufficient and not need outside equipment when confronting threats. These HQs have all of the structure and organization required for an independent and self-sufficient unit, [including] support, and transport units, as well as hospitals.”[1/2]

Components:
Prior to the Samen Alaeme plan, the NEZAJA's western region was reported to include the Kermanshah and Ilam provinces, but has since been expanded to cover Kurdistan and part of the Hamedan province, and is primarily composed of the remnants of the 81st Armored Division, and a handful of other brigades. [3]

Although the HQ is reported to cover Kurdistan, the primary NEZAJA units based in Kurdistan - the remnants of the 28th Infantry Division - are described by other sources as subordinate to the NW HQ. [4] This is far from the only inconsistency in reporting on this region. In 09/2010, ISNA reported that the HQ would include the 81st Armored Division, 35th Commando Brigade, 71st Mechanized Infantry Brigade, 1st Army Aviation Combat Base, 404th Communications Group, 1st Region Support[& Logistics], and the Khatam ol-Anbiya Air Defense HQ. [5]

Some of these inconsistencies can be easily explained - the addition of the 281st Brigade is due to the ongoing process of making divisional brigades independent, a process which had yet to affect the 81st Division in 2010. Presumably this process is still underway, explaining the lack of references to a hypothetical tactical/operational coordinating division HQ, or a 381st Brigade.

The suggestion that the locally-based contingent of the Khatam-ol Anbiya Air Defense Force would be subordinate to a NEZAJA command is notable since this force constitutes a separate branch of the Armed Forces, and would be akin to subordinating Navy or Air Force personnel to the Army Ground Forces. 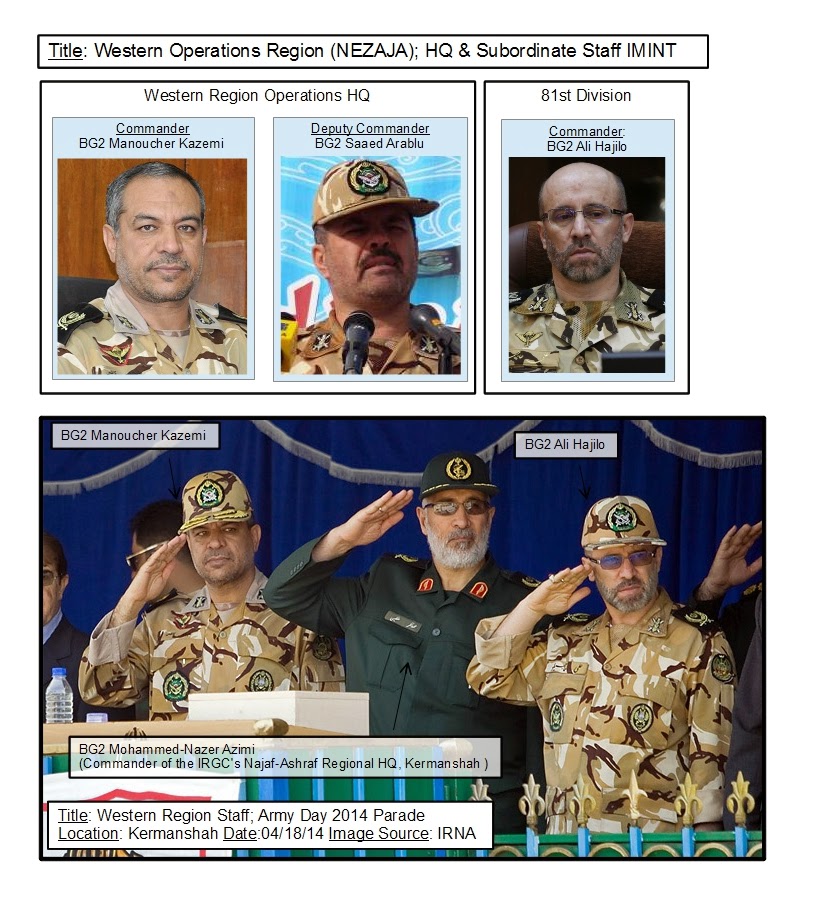