The Fakour and Rasool Air-Defense Components

At the request of a reader, we now take a brief look at two different elements of Iran's integrated air defense system (IADS).

Introduction:
On May 25 2014, the Khatam al-Anbiya Air Defense Headquarters (aka IRIADF) unveiled two new systems that they reported would soon enter production. [1] These were: 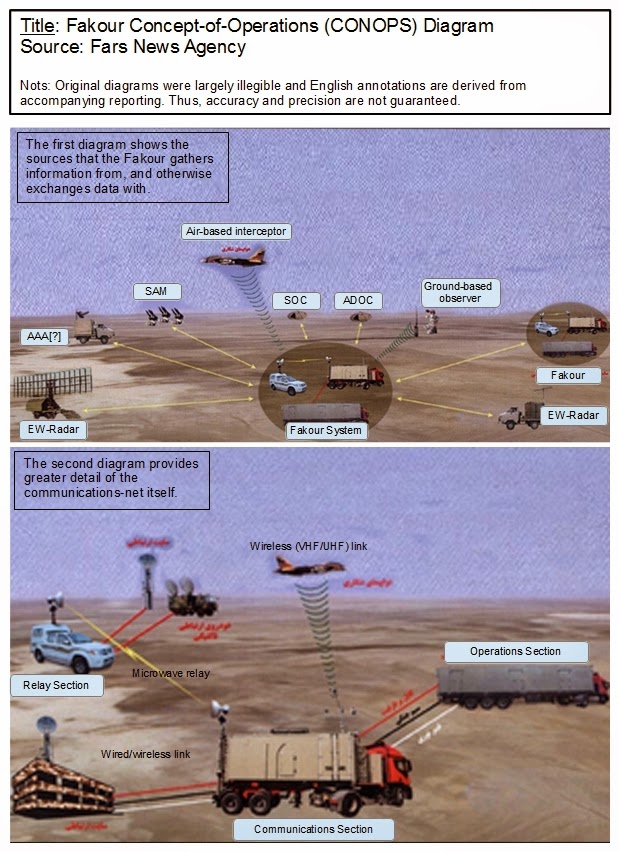 The Fakour is employed as a command-post for fusing and distributing sensor information at the tactical level. This means gathering data from a range of sources, which is reported to include active sources such as military and civilian radars, passive ELINT such as emission-finders, and air-defense units such as SAM batteries. This data is fuzed to produce a unified picture of the battlefield that can be used to cue air and ground-based defenses onto target.

However, it is unclear if the Fakour is only responsible for assembling information and passing it on (this includes passing both sensor data from below, and commands from above), or whether it is also responsible for analyzing the resulting picture (i.e. deconflicting contradictory information and assigning targets). The use of “C2” terminology in the Fakour's name would suggest the latter, at least to some degree.

The answer to this question would be a major indicator of the IRIADF's flexibility, and thus its overall survivability. If the Fakour only gathered and passed along information, local IRIADF units could blinded by disrupting the upper levels of this hierarchy. This has generally been the Western experience against Soviet-designed IADSs. However, if the Fakour were equipped with the processing and communication power to maintain a relatively comprehensive picture on its own, these local units could retain much more of their effectiveness.

Based on descriptions of the Fakour's compatibility with the IRIADF's sector-operations-centers (SOC), it is assessed to moderate to high confidence that the Fakour will be deployed within SOCs. SOCs are believed to be synonymous with the IRIADF's geographic regions (e.g. northwest, west, southwest, south, southeast, east, northeast, central), with a number of air-defense groups under each ones command. It is possible that the Fakour will be utilized at the group level.

The Fakour system itself is composed of three elements, these include:

Operations section: Mounted on a large containerized trailer, this section is responsible for processing received information, and using it to plan and coordinate subordinate operations. The trailer contains at least seven computer workstations

Communications section: Mounted on a smaller containerized trailer, this section is responsible for the system's signal reception and transmission. This helps protect the operations section by allowing it to function without emitting. For intra-system communication, the different sections can be linked by fiber-optic or conventional cables, and for external communication this section is equipped with HF, VHF, UHF, AM/FM, and microwave radio, which can be used for audio and data transfer (at a reported rate of 32 mbit/s).

Communications-relay section: This section is equipped with a microwave relay station mounted on a pickup truck, and is responsible for extending the range of the communication section's LOS data-transfer.

Rasool:
The Rasool is a communications node associated with Matla ul-Fajr family of acquisition radars. It can be used to integrate the radar with other elements of a local IADS, or with distant command centers in order to allow it to function as an independent early-warning radar. 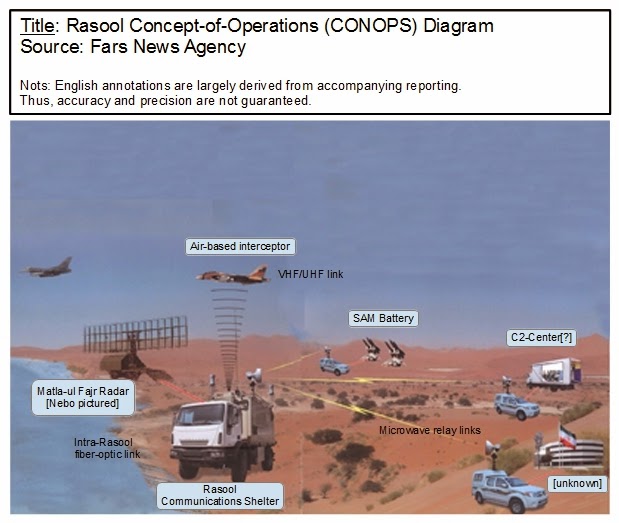 The Matla ul-Fajr (MuF) family includes the MuF-1, and MuF-2, which are descended from the Soviet P-12/18. Both operate in the VHF-band, which has led them being described as counter-stealth radars. They are visually characterized by their distinctive Yagi antennas arranged in rows on a retractable mast mounted on a containerized trailer.

According to press reports: [2]

The MuF-1 is a 2D (range, azimuth) medium/long-range radar with a maximum range of 300 km, and altitude of 20 km. It is characterized by its 12 antennas arrayed in two rows of six.

The MuF-2 is a 3D (range, azimuth, height) long-range radar with a maximum range of 480 km. It is characterized by its 32 antennas arrayed in four rows of 8.

The Rasool appears to be organic to the MuF, though, depending on how the MuF is organized, may be used to link it with C2-hubs like the Fakour, or SAM batteries at specific air-defense sites.

The system is composed of two vehicles, a communications shelter, and a relay station. The relay station is the same as the one used with the Fakour, and consists of a microwave station mounted on a pickup truck (32 mbit/s capacity). The communications shelter is mounted on an Iveco 4x4, and is fitted with HF, VHF, UHF, and microwave radios, and associated encryption and recording hard/software. Linking the Rasool with the radar itself is via fiber-optic wiring.

An example of how the Rasool may be employed can be found at the Fordow fuel enrichment plant (FFEP), and the air-defense group assigned to protect it. Assets deployed for the facilities point defense are detailed here, and include the use of a MuF-1 as an acquisition/EW radar for two half-strength HAWK batteries, and a handful of gun batteries. Imagery from late-2012 onward show the radar supported by a small truck fitted with a mast-mounted transmitter, very likely the microwave radios employed by the Rasool. Also wired to the MuF is a larger containerized trailer, which may function as a C2-hub like the Fakour, which is itself linked to a smaller container with an unknown roof-mounted transmitter/receiver.