What can we expect from the Ir-140MP?

Iran's defence minister - BG Vahidi - recently made the announcement that the maritime patrol version of the Iran-140 (An-140 produced in Iran) has entered production and will be delivered to the armed forces "in the near future", this, according to Iran's PressTV.

As of Fall 2010 Iran's assembly plant had turned out nine Ir-140s with more rumoured to be on the way (1) While these are all suspected to be the basic transport/liaison variants, Iran has touted several different configurations for the aircraft over the years - including models outfitted for AWAC, personnel training, EW, geological survey, cargo/personnel transport, VIP transport, paratrooper deployment as well as, of course, maritime surveillance. (2)

HESA advertises that their aircraft can be used for: detecting targets both on and below the surface, search and rescue, countering smuggling, piracy and terrorism, protecting fisheries and other resources, pollution monitoring, maritime traffic policing. (3)

So assuming that a handful of these aircraft do enter service in the near future, how do they stack up against Iran's current maritime aircraft like the P-3? What about other MP aircraft from around the world? Fortunately, for once at least, there is official documentation that answers these very questions.

We know there is no single MP aircraft, but at least five different configurations offering varying capabilities ranging from crew training, to environmental protection, to sophisticated anti-submarine and surface surveillance. The five variants are the Ir-140-HMS-100, HMS-200, HMS-300, HMS-400, and HMS-500. In addition to the specific variants, HESA advertises several example layouts for roles such as fisheries protection or coastal patrol with altered equipment loads.


All of the variants can be assumed to have some common avionics. Mounted in the nose of the aircraft is a RDR-1600B weather/search and rescue radar which is made by the Australian company Quickstrike. The 1600B is a modern, fully digital X-band radar that is capable of being integrated with onboard navigation equipment as well as functioning as a terrain mapping radar. (4)

Early models show it equipped with both anti-ship missiles (AShM) as well as torpedoes. It is unknown if this capability was retained in later designs.

Ir-140-HMS-100
The HMS-100 is outfitted for search-and-rescue (SAR) as well as basic maritime patrol (MP). Two observer stations fitted with bubble windows are located on both sides of the fuselage directly behind the cockpit. Observation is accomplished primarily via the Mk. 1 eyeball or portable binoculars and cameras. Behind this area is a passenger compartment with seating for 34. Alternately, it can also be outfitted with 18 seats and a four-passenger VIP compartment. At the rear of the aircraft is a rack containing both smoke markers and illumination flares, both used during SAR missions. A "SAR kit" can also be deployed from the rear service door, which likely contains a standard survival raft. The customary small galley and lavatory can also be found at the rear of the aircraft.

While its modest configuration restricts it's potential value in a high-intensity environment, the HMS-100 can still function as a low-cost peace-time alternative to, or as a trainer for, more advanced variants.

Ir-140-HMS-200
The HMS-200 is a step up from the HMS-100 though is still intended as a basic SAR/MP aircraft. It features a FLIR/TV camera in a ball mount on the chin of the aircraft. An operators station, located behind the observers station, features a VRR (a glorified VCR) and a video datalink. Other then this, the aircraft is identical to the HMS-100 with a passenger compartment, galley, smoke markers, SAR kit and lavatory.

ESMs are crucial in gathering signals intelligence (SIGINT) and are tasked with intercepting and classifying the RF emissions that have become so common in today's battlefield. ESM enables target detection and identification (for instance, you would know an F/A-18 is broadcasting it's APG-73 radar 73 km away to the south-east) as well as being able to use the data to develop and exploit better forms of offensive EW such as ECM/ECCM. On the HMS-400, two recievers pods are visible, one on the forehead of the aircraft, directly above the cockpit, and one on the belly in front of the landing gear.

The ESMs are likely integrated with the aircraft's defensive suite which includes a radar warning receiver (RWR) which cues an audible warning as well as the CMDS which fires chaff and/or flares to distract a homing missile. Optional warning systems includes as an IR-based missile warning receiver (MWR) and a laser warning receiver (LWR). Optional countermeasures include a towable decoy. Most interestingly though, another optional countermeasure is the ATIRJ which is a subcomponent of the US's AN/ALQ-212 system which is meant to defend against MANPADS-type missiles. It works by jamming the seeker of a closing IR-guided missile with lasers mounted on rotating heads. The system dates from the 1990s so it's certainly not inconcievable that Iran got their hands on some; there is also the possibility that HESA is using stock-imagery which, of course, is very common in Iranian media as anyone who has read an article about Iran's Saeqeh fighter jet that is accompanied by a picture of an Israeli F-16 knows.

In the interior of the aircraft, an additional operators station linked with the ESM/CM is located next to the first on the starboard side  of the aircraft. Four VIP seats is all that remains for passenger space and the main avionics array (MAR) has replaced the galley which now shares a spot with the smoke marker rack. The lavatory and SAR kit have remained put.

Ir-140-HMS-500
The HMS-500 is the model that most everybody thinks of when they think of the maritime patrol version of the Ir-140. Representations of it are always show in a blue and white camouflage pattern similar to what's worn by the IRIN's P-3s. Compared to the HMS-400, the HMS-500 is also capable of sub-surface surveillance (SSS) and pollution control (PC).

The stinger-like magnetic anomaly detector (MAD) jutting out of the tailfin gives this version it's distinctive appearance. This device does what its name suggests which is detect anomalies in the earth's magnetic field which submarines generate. This is also the reason for its stinger-like appearance; it needs to be completely clear of any interfering metals.

On the belly of the aircraft, in between the ESM pod and the FLIR turret is another blister pod which houses the microwave radiometer (MWR). MWRs are used to passive radiation coming off the ocean which in turn is used to detect and monitor oil spills - a logical problem within the Persian Gulf.

On the inside of the aircraft, a total of four operator consoles now line the starboard side in front of VIP seating. Behind the seating is an assembly which houses sonobuoys; sonobuoys are disposable, air-dropped sonar devices (both active and passive) used to detect submarines.

At the tail of the aircraft is the galley, MAR, lavatory and SAR kit.

How does it stack up?

Within Iranian service, there two, possibly three types of aircraft that the I4-140 is intended to replace: the P-3F Orion, the F-27-400M and possibly, modified versions of the C-130H.

The IRIN's primary long-range maritime surveillance aircraft is the P-3F which is reaching the end of its lifespan (as are all their US built aircraft). Currently 2-3 are operational at any given time and operate at an unknown level of readiness. On one hand, the decades of use may have taken their toll on both the airframe and the sub-systems, but on the other hand, Iran has overhauled and retrofitted them to some unknown degree. There have been no external additions that might give hints as to what these modifications entail. When they were originally delivered they were fitted with weather and surveillance radars as well as nose-mounted EO cameras giving the P-3 surface surveillance . Sonobouys and a stinger-mounted MAD meanwhile provide ASW capability. Iran's P-3Fs can be armed with lightweight Mk 46 torpedos, depth charges, or gravity bombs, but not AShMs. Overall, the P-3Fs are closely comparable in terms of capability to early P-3A/B variants.

Some of the IRIN's F-27-400Ms have been converted to basic maritime patrol duty and have even been reported to have been upgraded with avionics for this role. However, like the P-3Fs, no new external antenna or pods are visible that would give a clue as to the accuracy of this statement or not. At any rate, it is likely that the F-27 would be comparable to the HMS-100 in terms of mission role. Two-to-three aircraft are currently operational.

During the Iran-Iraq war, when the demand for maritime surveillance was at its highest and the readiness of the P-3s was the lowest, an unknown number of C-130Hs were converted for the maritime surveillance role. The exact nature of these modifications are unknown but may be similar in nature to the C-130H Ibex ELINT projects undertaken by the IIAF. It is unknown if any C-130s continue to serve in this role.

At the end of the day, the Ir-140MP is not a replacement for the P-3 on a 1-for-1 basis. On a purely mechanical basis, the fact that, empty, its a third the weight of a P-3 means that it's going to have a shorter range (almost a quarter), lower endurance and a lower internal volume available for mission-related subsystems. An aircraft with the range of the P-3 (or beyond!) would be perfectly suited for the IRIN's stated mission which is to project influence through the Gulf of Oman and Arabian Sea from the Horn of Africa to the tip of India. Recent operations like a continued presence in the Gulf of Aden and visits to countries like Syria and Sri Lanka emphasize the IRIN's shift towards a more expeditionary role. These ambitions however have remained hamstrung in many ways by the limited aerial support role of the IRIN. Surface ships like the Alvand frigate are lacking in terms of modern sensor fits. Meanwhile, only one-two submarines are available at any given time for patrol beyond the protection of the Gulf of Oman. So, by default, the responsibility of detecting and identifying potential targets falls to naval aviation as they are the only ones with the potential capability to cover such a large geographic area. Light aircraft like the Ir-140 or F-27 don't have the range to conduct patrols of any significant length beyond the Gulf of Oman.

At the end of the day, the Ir-140 is what it is, a light, turboprop aircraft, with capabilities to match. Within the context of the Persian Gulf and Gulf of Oman it's range and capabilities are more then sufficient and are comparable to a number of other light patrol aircraft like the F-50, CN-235 or any of the Dassault Falcons. In fact, the aircraft's most important asset is the basic fact that they're new - zero flight hours, brand new engines and brand new airframes. Relying on older aircraft like the P-3 is dangerous because the remaining flying hours left have to be shepherded and carefully guarded with intensive maintenance and support, all of which translate into less missions flown. The impact of modern, sophisticated avionics suites like what should be presumed to exist on the Ir-140-HMS-500 should not be discounted either. Even a relatively inexpensive radar like the RDR-1600 used in the Ir-140-MP is able to produce a much more narrow beam in contrast to the APS-115 on the P-3F which in turn gives a much higher resolution, allowing the radar to be used for tasks like terrain mapping or SAR where the radar on a P-3 would be simply insufficient. 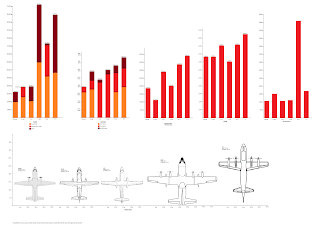