The 40th independent infantry brigade's “Shahid Chamran” garrison is either located in Ardabil, or Sarab, which are adjacent cities in northwestern Iran. It is possible that they are deployed in both locations, though the available literature is inconclusive.

On one hand, some media sources refer to the Brigade's location in Ardabil, quoting civilian officials who have called for its garrison to be relocated in order to ease urban development. (IRNA, 02/2012) Furthermore, the Army has resisted these calls, saying that the city's residents prefer the garrison's presence. (FNA, 04/2010) Lastly, the Army's 199th Infantry Battalion participated in the city's 2014 Sacred Defense Week Parade, a unit which has been associated with the 40th Brigade in the past.

On the other hand, an interview with the brigade's commander in 2014 seems to unequivocally state that the brigade is based in Sarab, not Ardabil:


The commander of the Army's 40th Brigade, said on the eve of Army Day: Despite there being rumors of 40th Brigade's (Sarab) transfer to Ardabil, we formally declare not only that no units from this brigade have been transferred to Ardabil, but we are currently expanding the brigade [in Sarab].

Col. Mokhtarifar … said: The 40th Brigade continues to be active in Sarab and its units have also been strengthened.

He added: We are currently holding meetings with the Office of Natural Resources to acquire land to the east in order to expand this garrison and strengthen its units. (0431.com, 04/2013)

The following operates under the provisional assumption that the brigade is based in Sarab.

The nearest major transportation artery is Freeway 2, which runs from Tehran to Tabriz, connecting the northwest with the nation's core. The garrison itself is located on Road 16, which links Tabriz and Ardabil. 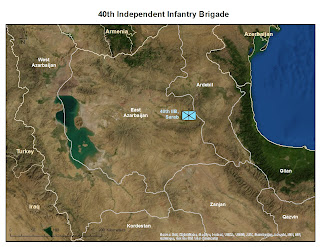 GEOINT from Google Earth dates from November 2010 and reveals a much larger compound than the nearby 36th IAB's, especially in number of barracks (19 vs 4). This may reflect a genuine difference in strength, but may also be explained by unknown factors (for instance, the 40th brigade may share the compound with the 4th Brig/21st Div (now, likely, the 421st IIB), which is also based in Sarab.

The compound is typical of army infantry brigades, with zones separated into distinct north-south columns. Mocked-up trenches, and other earthworks for training can be found to the east, while a column of automotive/mechanical-type buildings can be found to the west. In between is a parade ground, and a column of barracks, and a column of secondary garrison structures like classrooms and mess halls. Only soft-skinned vehicles are visible in the small motor pools, though this includes a handful of earth-moving equipment, including three-five bucket loaders, and one crane or excavator.

Photos from the 2013 Army Day parade portray a cross-section of the brigade's small-unit organization. Assuming the formations seen on parade reflect actual organization, several observations can be made. Rifle companies are 58-men strong, a number which includes a four-man headquarters. Company commanders tend to be 1st lieutenants, or captains, while the deputy-commander and other company-level staff are typically 1st, 2nd, or 3rd lieutenants, or sargent-majors (aka warrant officers). The rifle company includes six RPG-7s, six MG3s, and six radios, and 36 rifleman, though sometimes 60 mm mortars are included in one form or another. It's noteworthy that this is practically identical to the observed organization of Basij rifle companies. Furthermoe, small-arm subtype appears standardized at this level, for example, fixed vs collapsible-stock G3 rifles.

Assuming an intuitive distribution of this equipment, this would translate to two RPG/MG3s, one radio, and 12 rifleman per platoon (assuming the three remaining radios are held at the HQ), for a total of 17 personnel/plt. This, in turn, suggests two squads per platoon, with six rifleman, and one MG3 and RPG-7 each. It's unclear what the platoon HQ would look like, though it's likely the radio operator would function as the assistant platoon leader. Given a company is generally commanded by a junior officer, platoon command may fall to enlisted personnel.

Assuming this is an accurate picture of small-unit organization, one can conclude that light infantry companies are, by themselves, weak relative to other company-level organizations. The main culprit for this is the under-strength platoon, with it's two, rather than three or more squads. This is compounded by the lack of a company-level weapons unit such as an ATGM platoon, as well as the lack of organic mechanized transport and fire support from something like even a BTR-60 or M113. That being said, given that companies tend to be commanded by junior officers, keeping platoons (and thus, the burden on their enlisted decision-makers) small may be a good idea. In this manner, a 17-man platoon commanded by a sergeant isn't much different from a 13-man squad commanded by a corporal.

The lack of the usual support weaponry found at the infantry company level puts the burden of combat (e.g. anti-tank) support at a higher level. One of these levels is the motorized anti-tank battalion. One formation seen on parade was as strong as a rifle company (54+3+1 personnel), but was armed entirely with RPGs. One explanation for this is that we are seeing a dismounted motorcycle battalion, which would correspond to the 27-bike organization observed elsewhere (three companies of 9 bikes each, with a two-man crew per bike).

Also visible within the parade were smaller infantry forces outfitted in cold-weather gear, and ghillie suits, as well as soldiers equipped for chemical-protection and mine-clearance. Interestingly, one soldier wore crossed-saber branch-insignia on his collar, a symbol which is typically associated with cavalry forces. This may represent a reconnaissance, or other mounted force. Given that a separate insignia exists for the armored forces (a tank superimposed over crossed-sabers), it might imply a light cavalry force. This, in turn, may represent a legacy of British influence on the Iranian army. Visible on the periphery of the parade were a pair of D-30 towed guns. Given deployment patterns in other brigades, it is reasonable to assume a battalion of them provide brigade-level artillery support.