Historical reports frequently mention the brigade in descriptions of the Fath al-Mobin Operation (March 1982), which was among the first of the major Iranian counter-offensives in the Khuzestan region. Although the Iraqi Army – particularly its armored forces – suffered heavily, the details of the 37th IAB’s contribution is unknown beyond the fact that they shared an operating area with the Army’s 1/92nd AB, the 55th ABB, and a number of Sepah brigades and battalions. [Source]

Today, they are garrisoned 15 km south-west of the city of Shiraz in the Fars province, which would presumably put it under the command of the south-west operational headquarters. 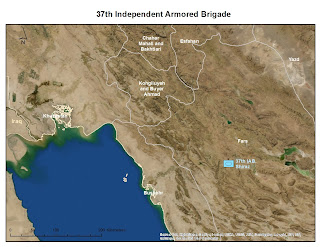 Google Earth imagery is available for October 2003, May 2010, and December 2012, although Bing Maps offers a clearer representation of the same 2010 imagery
Unlike many other garrisons, this base is relatively spread out with buildings haphazardly distributed. This, combined with a lack of paved surfaces for much of the base, visible spoils from ongoing construction, the completion of a number of significant buildings between 2003 and 2012, and the shifting location of motor pools over the same time may suggest that this was not the brigade’s historical location.

In the latest imagery, a handful (~6) BTR-60s. [2] Imagery from 2003 potentially shows upwards of 25 BTRs in spread throughout the compound, but the low image quality makes it difficult to be sure. It is logical to assume that these equip the brigade’s mechanized infantry. There is a high likelihood that M577s or even plain-M113s are used as command vehicles.

When differentiating light AFV types from one another – such as the BTR, from the BMP – the most reliable indicator is length/width ratio, as imagery quality can obscure key features, and satellite-obliquity can make measurements using Google Earth’s ruler tool unreliable (a problem previously described in the entry for the 38th IAB in Torbat Jam). In this case, the tracked BMPs appear wider and shorter than the narrower, wheeled BTRs.

In the same motor pool just north of the bases main entry-control-point are ~20 tanks. [2] At least three can be identified as FV4201 Chieftains thanks to the distinctive shape of their turret when locked backwards over the deck. It is difficult to say whether or not the rest are Chieftains, or if it is a mixed battalion.

While the number of visible AFVs of all sorts – except SPGs – falls well below the allotment for a full-strength brigade, it is possible that more are stored under cover. This is supported by the abundance of tracks leading to and from a set of garages – easily visible in the 2012 imagery – and in the style of concrete pads used in their construction – visible in the 2003 imagery. [3]

Another notable feature, though not visible on the map above because of its scale, is the territory next to the base, which is used for training. This includes firing ranges for small-arms, field-fortifications and trenches for infantry, observation points for supervisors, revetments for artillery, lanes for AFVs to fire and displace from, and even craters from the simulated, gasoline-enhanced explosions often seen in Iranian exercises.

Further south, there is a hardened-shelter storage facility likely associated with the brigade's munition storage. On an unrelated note, though still potentially of interest, is a UGF to the Northwest with the distinctive two-tunnel entrance that are characteristic of high-value Sepah facilities found near Qom, Khorromabad, and elsewhere.
Posted by Author: Galen Wright at 7:26 PM