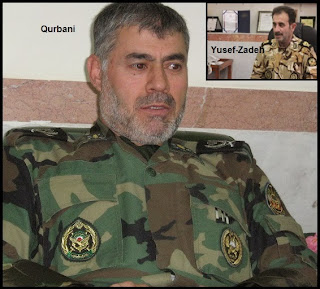 The 58th 'Zulfiqar' Commando Division is based in the Semnan province, east of Tehran. Like other divisions, it is transitioning to the NEZAJA's new force-structure of independent combat brigades subordinate to regional operations headquarters. (1)

Two of the division's newly-independent brigades can be identified: the 158th in Shahrud, and the 258th 45 km north-east of Shahrud. One can assume that a third brigade exists, though no reference to it in open-source literature has been found. The function of the remaining divisional-HQ under the new organization is unclear, but – as per the pattern established in other divisions – it is reasonable to believe it persists, at least as a transitory body.

Wikimapia-annotations suggest that the four+ story buildings on the western side of the parade-yard are barracks [a], while the column of H-shaped buildings to the east are unit headquarters/offices [b]. The annotations are consistent with other open-source reporting, which mentions both the 743rd and 183rd infantry battalions (6) (7). The available billeting corresponds to the brigade's six or seven battalions, with the remainder allotted to the divisional staff and support. This likely includes the 'T'-shaped buildings located south of the taller buildings. [c]

Other buildings that can be identified include a series of covered outdoor classrooms on the eastern edge of the parade-yard, which can be seen in use during 12/2012 [d]. Further east is a column of administrative offices (ex: personnel) [e]. North of the parade-yard is the brigade HQ [f], and the garrison's gym [g], mosque [h] and garages/workshops [i]. The buildings in the southern portion include residential housing [j], and divisional offices [k].

Several motor-pools can be found on the periphery. Near the southern entrance is a pool of engineering equipment including at least one excavator, two graders, three (+/-) bulldozers, and three (+/-) front end-loaders, and about 15 large trucks of various types [l]. A number of buses can be found in adjacent compounds, their prominent front and side windows visible in 12/2012.

Slightly south-east of the division's HQ is a motor-pool containing around 15-20 3/4-ton trucks, and around nine larger trucks. [m] The larger trucks are likely Mercedes L911 given the overall length (~6.5m), and short-bonnet. About half of which are uncovered, while the rest carry a container, or other cargo. Although these are all multi-purpose vehicles, the organization is consistent with a divisional headquarters.

To the west of the barracks is a pool containing at least six 1 1/4-ton flat-bed trucks fitted with containers typically associated with communication-shelters, or other electronic equipment. [n] The nearby trailers are likely the generators typically found alongside this equipment. 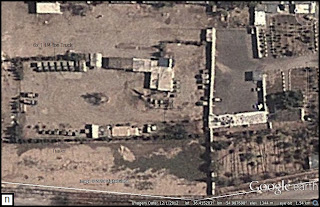 Immediately to the north is another pool containing a battery of six in three platoons of two. [o] That being said, the weapons themselves cannot be identified, and may instead be more mundane towed items, such as field-kitchens or aid-stations. Along with these systems are a number of associated support elements including 12 open-topped trucks organized into three sections of four. These include the short-bonnet 911s as well as more modern cab-over-engine models. Opposite these, are six more trucks of a similar type; one is equipped with a large container (possibly signals/HQ), three are covered (possibly H20/POL), two are uncovered (general transport). Alongside these heavy trucks are a handful of smaller 3/4-ton vehicles. 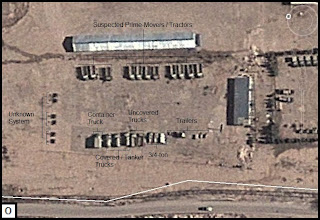 At the north of the garrison are four more motor-pools in a row. In the westernmost pool, between 03/2012 and 02/2013, are upwards of 15 1/4-ton Jeeps, four 3/4-ton vehicles, and 8-10 larger trucks. [p] The latter category includes around three tankers, four general-purpose trucks, and one container truck.

The pool to the east includes two+ tankers, three container-carrying flatbeds, and a handful of smaller vehicles and trailers. [q] 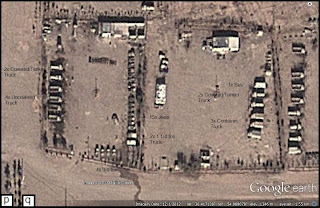 East of this is a pool containing seven 3/4-ton trucks, 20+ 1/4-ton Jeeps, and eight heavy trucks. [r] The latter category includes four uncovered trucks, three tankers, and one-two container trucks. On top of this, there also two distinct categories of four-six towed items. These may be trailers, or towed weapons like the Zu-23-2. The easternmost motor-pool has roughly the same type and number of equipment. [s] 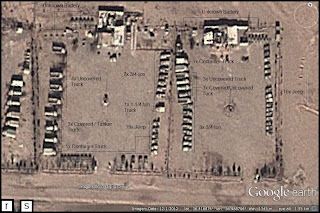 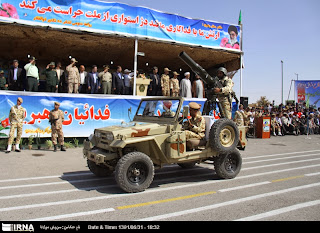 It is reasonable to believe that the three most populated pools in this above-described row represent the brigade's three infantry battalions. Each has 15-20 1/4-ton Safir/Jeeps, and four-seven 3/4-ton vehicles to provide tactical mobility, and carry weapons. These vehicles, or at least some of them, make-up battalion-level weapons companies, which likely includes a mortar platoon (82 mm), an anti-tank platoon (recoilless rifle), and a machine-gun platoon (DShK). The DShKs have been seen with anti-aircraft sights, suggesting they double as the bn's air-defense, though they may be supplemented by MANPADSs and Zu-23-2s. Other weapons seen on parade, like TOW ATGMs, and 107 mm rockets might be found at this level, but might also be deployed as brigade assets. 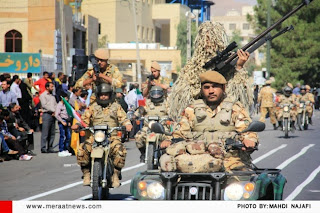 The rifle companies themselves are armed with the usual mix of G-3 rifles, MG-3 machine-guns, and RPG-7 anti-tank weapons. Given nation-wide patterns, the company likely includes a 60 mm mortar section.Parade photography suggests that the rifle units make heavy use of motor-bike and ATVs for tactical mobility. One unknown is the level at which the AM-50 (Steyr HS.50 copy) is deployed.


In addition to these tactical vehicles, all three pools have approximately 10 support vehicles, including four general-purpose cargo trucks, one-two container trucks for communications and signals, and two-three tankers for POL and water.

On the eastern edge of the garrison are an additional one-two motor-pools of indeterminate purpose with a number of light and medium/heavy-flatbed trucks.

In 12/2012, nine towed guns of indeterminate type with conventional split-tails can be seen in the parade yard, along with a number of troops making use of the outdoor classrooms. [t]

258th Brigade
The 258th 'Shahid Pajoohandeh' ICB is based in the 'Chehel Dokhtar' garrison near the village of Kalateh Kij north-east of Shahrud. (8) It is rumored that the commander is BG 2nd-class Zare, though the credibility of this claim cannot be assessed. (9) The date of the brigade's conversion to independent status is unknown; the first confirmed reference is from August 2013. (10)

According to the Persian Wikipedia entry, prior to its independence, this brigade was composed of three infantry battalions, one air-defense bn, one artillery bn, and one training bn. (11) Although this organization is plausible, it is likely dated and incomplete. Other sources include references to the 744th Bn (12).

Google Earth offers imagery of the base from 12/2005. Bing supplements it with imagery from between 06/2006 and 10/2008. Identified buildings include a communications building [a], a bakery [b], a kitchen [c], a bathroom [d], and a barracks [e] for an artillery-battalion's headquarters-company.

South of the parade yard are six 'H'-shaped barracks corresponding to each of the training battalion's companies. [f] Although larger than infantry battalions, the size is comparable to other Army training battalions. East of the parade yard are three distinct barracks clusters with their associated ancillary structures.  However, the complexity of the organization makes it difficult to estimate force structure/size. Annotations indicate that the northernmost cluster contains offices, barracks, and headquarters for the brigade's support battalion. [g] The cluster below this contains a barracks for the weapons company assigned to the 193rd infantry battalion [h], which has it's staff and HQ company in the 'T'-shaped buildings to the south [i].

The above comments made regarding the 158th brigade's small-unit organization are applicable here as well.

In Bing's imagery, at least three battalions of towed tube artillery – one large, and two small – are arrayed on the parade-yard. The large-gun battalion [j] is comprised of three batteries of six guns each, while the smaller gun battalions [k] [l] each have one-two batteries with seven guns instead of the usual six.