In the second part of 'Basij Organization' series, we now to turn to the Beit al-Moqdas battalions (BaM bn), alternately known as rapid reaction battalions (RR bn). The first part of this series covered the Imam Hussein battalions (IH bns), and can be found here. Unlike IH bns, BaM bns are closer to a true militia force than conventional infantry.

Although the 'rapid reaction'-adjective predates the formation of these battalions, so-called RR bns were first referenced in May 2012 by Basij Commander Brig. Gen. Mohammed Reza Naghdi who announced their creation.[1]

At the same time, Naghdi also announced that these battalions across the country would simultaneously carry out exercises each year in their respective provinces. Since then, the 'To Jerusalem' exercises have received heavy media coverage each year. These exercises typically occur in November, December, and February, last around 2 days, and typically involve 5-10 provinces at a time.

In August/September 2012, the Deputy Commander of the Basij – Brig. Gen.Ali Fazli – claimed that: “6,000 Ashura and al-Zahra battalions have been organized in the form of Beit al-Moqdas Battalions.”[2] This statement indicates that these new battalions were formed by reorganizing pre-existing types. However, the fact that BaM bns are uniformly male (while al-Zahra bns are female) suggests this may be a partial misrepresentation.

This hints at a broader nomenclature issue: just what is a BaM or RR bn anyway? Open source media frequently use the term 'Beit al-Moqdas' and 'Rapid Reaction' interchangeably, but its not clear if this is always the case. In other words, all BaM battalions are RR bns, but are all RR bns BaM bns? Are Ashura, al-Zahra, and Kosar battalions grouped under RR framework, even though they are not “RR bns” per se.

In Janaury 2014, an IRGC commander further noted that since 2012, close to 250 of these newly organized battalions are “tribal”, suggesting that they hail from Iran's historically-tribal ethnic minority regions like Kurdistan or Luristan.[3]

Like IH bns, BaM bns are one of the Basij's primary combat-units. Although this might seem, at first glance, to be a tautology – the Basij are a militia and thus inherently combat-oriented – it must be remembered that the majority of the Basij aren't dedicated militia units. In this regard, the Basij plays a role closer to that of 'the Party' in east-bloc countries, focusing on social, cultural, and political power (soft war), rather than traditional militia activities (semi-hard/hard war).

With this in mind, BaM bns fill the role of a classical militia. One IRGC commander in charge of a BRZ noted in October 2012 that: “...confronting defense and security threats [are] the most important missions of the Beit al-Moqdas battalions.”[4] Similarly, when announcing their creation, Basij commander Naghdi characterized them as being combat-oriented, and capable of both territorial-defense and total-war.[5]

Instead of forming the core of conventional maneuver forces (like IH bns), BaM bns provide immediate, local defense without the need for a lengthy mobilization process. Hence their name – rapid reaction forces.

Some of the tasks associated with the rapid reaction role include, as described by Brig. Gen. Fazli in November 2012: “...urban-defense, SAR/disaster-relief, confronting sedition [i.e. riot control], defense of [static] sensitive areas/centers, manning checkpoints, and ambush/counter-ambush [tactics]...”[6] The description of another exercise echoed this, noting that responsibilities includes conducting patrols in order to secure the local population and other soft targets.[7] Against conventional armies, this means fighting delaying actions in order to buy time for other units – such as IH battalions – to mobilize.[8] This includes “anti-heliborne” operations.[9]

When compared to conventional ground forces, militia units have only the most rudimentary capability when when it comes to carrying out complex tactical actions. Exercises are short and just as focused on political-ideology as combat training. Actual training is mostly limited to basic arms handling and maneuver.

Civil defense is another responsibility of rapid-reaction forces and seeks to minimize the damage to local populations during a war (or natural disaster). [10] [11] Thus, in many exercises, Basij can be seen practicing fire-fighting, or performing search and rescue operations.

County-level tactical procedures are hinted at in open source media. For instance, during the February 2014 exercises, within a county of the Qom province, two BaM bns were responsible for passive defense, while another two conducted urban-defense, while a Kosar battalion performed civil-defense.[12] During November 2012 exercises, within Divandareh county in the Kurdistan province, one BaM bn was tasked with covering the highway leading north out of the county-capital, while another covered the highway leading south, and a third was held in reserve inside the city. [13]

The tasks described by Iranian sources match traditional militia responsibilities, mirroring a description of militia activities provided by the US Army's Training and Doctrine Command's pamphlet on a hypothetical generic OPFOR militia: “In the event of an invasion, militia forces are expected to defend key installations in their towns and cities, among them factories, bridges, roads, and railways. … These forces, quite literally, fight for their farms and homes. Predominantly, militia units are manned by workers and peasants, over-age reservists, medically-retired soldiers, women, and young men not yet old enough for military service.”[14]

According to Gen. Naghdi's comments in May 2012, each BRZ is expected to mobilize a rapid reaction battalion. A BRZ is a subdivision of a Basij Resistance Area (BRA), which itself is typically a county-sized administrative unit. Thus, a general rule of thumb is that one should expect there to be a militia battalion for each township, or equivalent population center (ex: a neighborhood in a larger city).


On the other hand, the commander of the IRGC in the Zanjan province has been cited as saying that a RR bn is assigned to each of the Basij Resistance Bases (BRB) that make up a BRZ.[17] This claim is questionable given that many BRBs don't have a military role. It is possible these competing claims can be reconciled; for instance, like IH bns, BaM bns may have their own BRB, but not every BRB is expected to field a BaM bn. Alternatively, at least one image suggests that rapid-reaction platoons may be found at the base level.[18]


Assuming a deployment rate of one bn per BRZ, the total number per province will still vary widely according to internal provincial organization, something that remains opaque at this time. Generally speaking, observed strength is generally less than 10 bns per BRA, with just a handful found in many rural counties.

Assuming that the original figure of 6,000 battalions provided by Gen. Fazli is accurate, this translates to a total strength of 1.4 million personnel. Even if this theoretical strength is accurate, it is questionable how many of these forces could be mobilized at any one time, though since they are locally based, it is unreasonable to assume that they would be called to do so at the same time.

Media reports following each major exercise tend to emphasize the numbers of personnel involved, providing article titles like “10,000-person exercise in province X” or “30,000-person exercise in province-Y”. This narrative is meant to emphasize the level of support for 'the system' (Velayat-e Faqih), granting it legitimacy while at the same time deterring those who would seek to challenge it. This reflects the degree to which the Basij are not just a combat organization, but one that primarily conducts 'soft war' – the battle over ideas.

In other words, whether or not these 30,000 Basij engage in realistic wargames, or are just camping in tents while attending workshops for two days is irrelevant. The point is that 30,000 people are willing to sacrifice time and energy in order to support their government.

BaM bns have both a numerical and nominal designation though, like with IH bns, the nomenclature for representing these designations varies. They may be referred to either as BaM bns, RR bns, or BaM RR bns. This variety is illustrated in this short list of observed titles:

Reports differ as to the size of a full-strength BaM bn. During exercises in early-2014, ISNA reported the deputy commander of the IRGC in Kerman province as saying that each battalion contained more than 260 personnel.[19] This account is supported by at least one image of a battalion in northwestern Iran being reviewed.[20]

However, in Novmber 2013, an IRGC operations deputy from the Rasht-county BRA in the northern Gilan province was quoted as saying that each battalion had 234 personnel.[21] This account is supported by surprisingly detailed reporting from exercises in Semnan.[22]

Whatever the hypothetical strength of a BaM bn is, it's actual strength is likely to be less. In the example from Rasht provided above, even though the commander claimed that the two battalions active in the exercise each had a strength of 234, the imagery provided alongside the report showed both at barely 50% of this. This hints at the risks of using exercise reporting to estimate force structure. In fact, it is extremely rare to see any assembled battalion with greater than 200 personnel. More often than not, the number is around 130.


Each battalion is divided into three companies (first, second, third). There are few references to these companies in media reports, which instead suggest that the basic building-block of the battalion is the platoon.[23] For instance, one article on the 2012 Semnan exercises noted: “In reference to the forming of more than 217 operational platoons subordinate to RR-BaM-battalions...”[24]1 Similarly, battalions are often described as being comprised of X number of platoons, rather than Y number of companies. [25] [26] 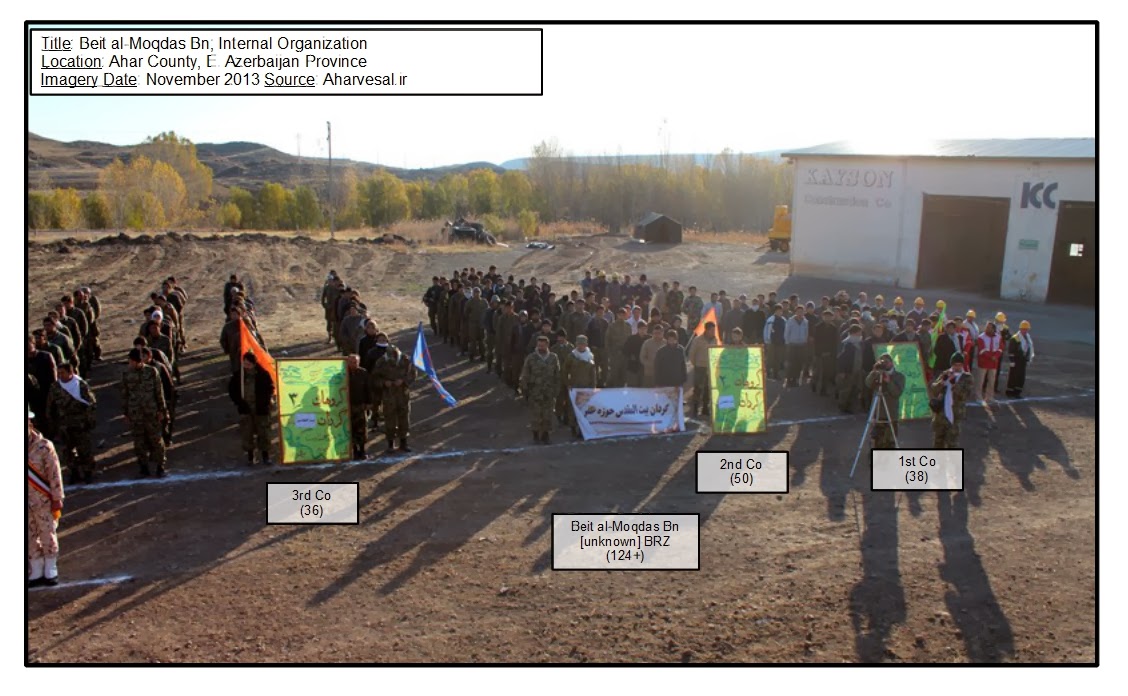 Nonetheless, companies do exist in one form or another with a strength of approximately 60 personnel.[27] 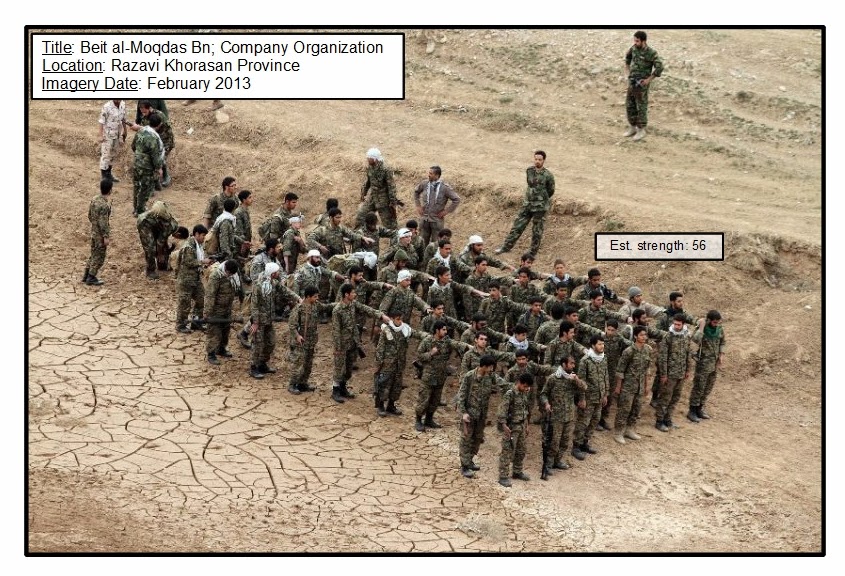 One possible explanation is that platoons and battalions are administrative units associated with, respectively, BRBs and BRZs, while companies are formed in the field. If true, this would help explain some of the questions concerning the organization of BaM bns within the provincial hierarchy described above. This is supported by some of the earlier reports which overwhelmingly tend to use platoons as the basic unit of organization.

With a theoretical strength of 22 personnel, these 'rapid reaction platoons' are the smallest Basij sub-unit.[28] One early source notes the existance of two different platoon types – Bam and Zulfiqar plts, though references to latter type have since disappeared.[29] In existing observations, this is the level at which battalions are understrength. While a bn commander will always have three companies to work with, and a co commander will always have three platoons to work with, a platoon may only have a handful of fighters. 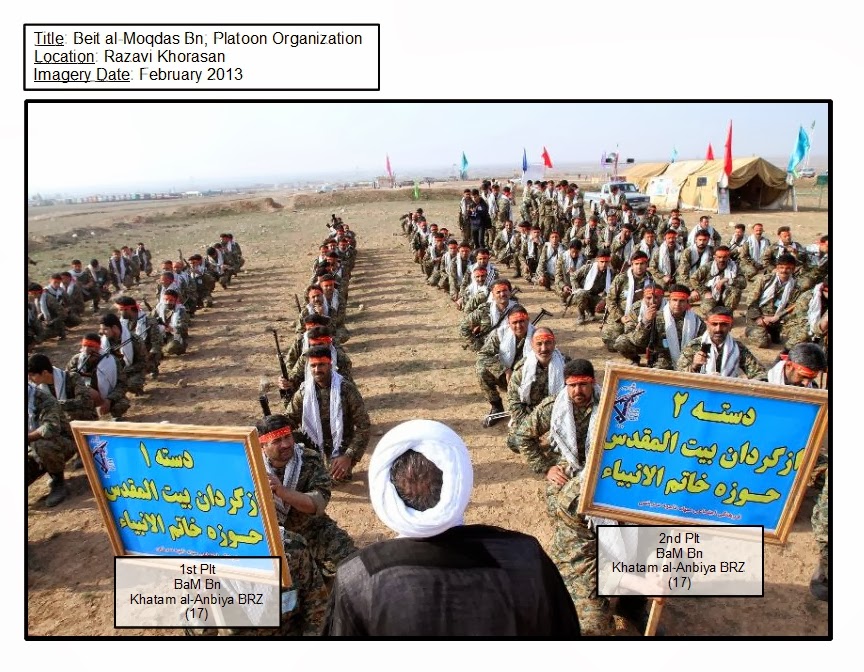